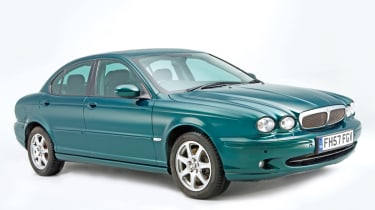 • Tyres can wear quickly and unevenly on four-wheel-drive cars, so check the state of the tread.• The ZF-built gearbox hasn't proven very durable. If it fails, expect a big bill to repair it.• Dual-mass flywheels can fail. It's most likely to be an issue with the 2.2-litre diesel, and is a costly fix.

Petrol X-Types are thirsty, but they are the only ones with four-wheel drive. You’ll get more for your money if you avoid diesels, but fuel and road tax costs will be much higher on petrol versions.

Equipment is generous across all models, but avoid entry-level cars – especially early ones with wind-up rear windows and air-con rather than climate control. For extra kit, buy an SE. Something sportier? Try a car with Sport trim.

We’d also recommend a post-July 2007 diesel edition, ideally a 2.2d, in manual or auto. Petrol autos are best avoided, though.

The X-Type has been recalled six times. In March 2003, it was called back over electrical control module issues, while there were three issues in 2004 – to fix warning labels coming off the space saver spare wheel, the ESP cutting in unnecessarily and possible handbrake failure.

The most recent recalls affected diesel cars only. In July 2005, the X-Type was called back over potential electrical short circuits, while the latest issue – in September 2011 – concerned cruise control problems.

Our view: Our Drive Power results show the X-Type has fallen out of favour. Having peaked at number 37 back in 2008, it plummeted to 82nd place in 2013. Owners still praise the car’s ride quality, as well as its handling and performance, but tell us reliability is poor and running costs are high.

Your view: Jane Stephenson from Crawley, West Sussex, is on her second X-Type. “The 2.0d engine offers strong performance with good economy, while it’s refined and well equipped,” she says. “Running costs are low, and niggles have been rare. It’s just a shame about the styling.”