The most important car of the year has landed - and Auto Express is first behind the wheel. 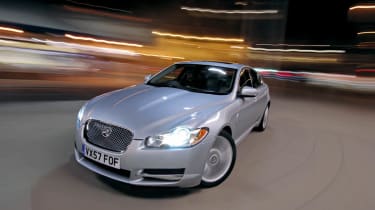 Well done Jaguar! The XF is one of the best cars the firm has ever made. Its beautifully crafted cabin is full of neat touches and is brilliantly equipped. Handling is class-leading, and the diesel gives a great mix of performance and economy. We’re not sure about some of the styling, and we’d like to try it on smaller wheels, but the XF is a big leap forward. A superb all-rounder, it offers a sky-high feelgood factor.

The XF has landed in the UK... and it’s arguably the most important executive car Jaguar has ever built.

In Issue 922, we went to Phoenix, Arizona, to drive the S-Type replacement. But this time, we’re on home soil to bring you the definitive verdict on how it rides and drives.

With Indian giant Tata on the verge of buying both Jaguar and Land Rover from Ford, the big cat’s future now looks secure. So, is the new XF the car to take the firm forward, and beat Audi, BMW and Mercedes in the pro­cess? Well, judging by the attention it received on our photoshoot in the centre of Coventry – only a few miles from its birthplace – it certainly gets the public vote, even if some people were shocked to find it was a Jaguar.

And that’s not surprising when you consider how much of a design departure the XF is. Gone is the retro look of the S-Type, and in comes a sleeker, more modern shape with a rakish roofline and short overhangs.

From the rear doors back it’s particularly attractive, resembling Maserati’s Quattroporte with its elegant proportions and sculpted tail-lamps. We’re not so sure about the front, though, with its gaudy grille and fussy lights.

If there are doubts about the exterior, the interior is difficult to criticise. Inside, the XF does what all luxury cars should do – it makes you feel special. From the pulsating starter button and swivelling air vents to the cylindrical gear selector which rises up from the console, there’s plenty of theatre.

Wood and leather is mixed with aluminium alloy to give a thoroughly modern feel. But the stand-out feature is the lighting, which bathes the dials in a classy, cool blue.

A long kit tally includes cruise and climate control, heated electric seats and sat-nav. There’s lots of space up front, but less so in the rear, especially for six-footers. But the 500-litre boot is huge and the back seats fold 60/40.

While the XF’s pair of 4.2-litre V8 petrol engines – one complete with a supercharger – are sure to grab the most attention, it’s the 204bhp 2.7-litre twin-turbo V6 diesel that’s set to be the top seller. At £37,500 for this Premium Luxury model, it looks expensive next to its rivals, but when you thumb the starter button, you know the car will be great on the move.

It’s incredibly refined, and emits a low rumble throughout the rev range. With 435Nm of torque, it offers deep-chested acceleration and relaxed cruising. The oil-burner is also economical, returning nearly 38mpg combined.

The six-speed gearbox plays a big role in all of this, swapping ratios smoothly in auto mode, and giving the driver plenty of manual control as well via its steering wheel paddles. With suspension from the XK coupé, it’s no surprise to find the XF handles brilliantly. Body control is superb, the steering is sharp and the car slices through bends better than any rival.

However, our model was fitted with optional 19-inch alloys, which create some tyre roar on motorways and take the edge off comfort. We reckon the standard 17-inch wheels would offer a truly cosseting ride. Nevertheless, the XF is a fantastic all-rounder – and we’ve no doubt it will be a huge hit.

BMW 525d This is the XF’s toughest rival, and has no real weakness. But while the 5-Series diesel excels at being a fast luxury express, it lacks the soul that the XF has to spare.