Latest big cat looks and goes like a supersaloon – but with impressive diesel economy. 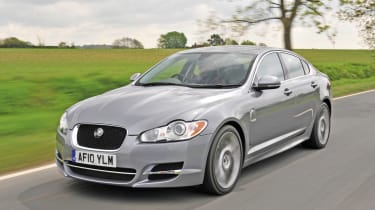 The XF Diesel S is a car with serious appeal – and the new additions make its jack-of-all-trades accomplishments stretch even further. The exterior Aerodynamics Pack is a great extra which adds some subtle aggression to the XF’s already beautiful lines. The Dynamics Pack features those stunning wheels and dampers, which do a brilliant job of keeping things comfortable no matter how fast you drive. Coupled to the superb engine, slick six-speed auto and sumptuous cabin, this means the latest XF is a serious contender against the just-launched 530d.

The looks of an XFR and the running costs of a diesel: meet the hot Jaguar saloon which promises the best of both worlds!

When we first drove the flagship 271bhp XF Diesel S back in Issue 1,054, we raved about its ability to provide blistering acceleration, yet return 42mpg. But now the Coventry firm has made its BMW 5-Series rival even more desirable, thanks to a stylish bodykit.

Called the Aerodynamics Pack, it’s designed to appeal to those who need diesel economy but secretly hanker after the look of the V8 supersaloon. It’s the result of demand from buyers who saw the standard Diesel S parked next to the XFR at dealers. The aesthetic additions come in two stages. For £1,500 you get a black grille and more highly sculpted side sills – just like those on the XFR. The most obvious extra is the deeper front bumper with enlarged air intakes garnished by chrome slats. Another £500 sees the addition of LED daytime running lights.

Aside from the lack of bonnet louvres, the oil-burner boasts the same subtly muscular style as the XFR. Given that BMW’s M Sport additions are a hit with buyers, the new-look XF is likely to win fans, too, despite the steep asking price.

To complement the beefed-up looks, there’s a new Dynamics Pack as well. This £1,250 option gives you the Adaptive Dynamics system, which uses sensors to analyse suspension and steering movements 500 times per second. In theory, this ensures that the ride is comfortable yet sporty no matter how you drive.

A set of 20-inch five-spoke alloy wheels is also included. The two option packs are part of a whole range of updates for the 2011 model year XF. Others include an upgraded interior lifted directly from the XFR.

The car already boasts one of the best cabins of any model on sale, but Jaguar has added a supportive leather driver’s seat. This features 18-way adjustment plus excellent side bolsters to keep you locked in place.

Our top-spec Portfolio car also benefits from Alcantara headlining and a leather dash to add more glamour, which contrasts well with the contemporary chrome and piano black trim. While we still think the starter button which illuminates red like a heartbeat, heater vents that swivel and rotary gearknob which rises from the transmission tunnel are gimmicks, they do bring some welcome ‘surprise and delight’ which is absent from the car’s premium German rivals.

All models in the range get the new interior, and this is a definite bonus. Despite all those seat adjustment options, finding a nice, low-slung position isn’t complicated. And what about the driving experience? Well, the engine whirrs into life very quietly, which is at odds with how much power it produces.

On the move, the larger wheel and tyre combination does create extra road noise, but the XF remains impressively refined and the engine is sublime with its effortless punch. What’s more, the suspension easily irons out the most potholed B-roads, and benefits from Jaguar’s expertise at setting up cars specifically for the UK. It feels more supplethan a BMW 530d, for instance.

The XF’s steering is sharp and direct, but it’s a shame that the Dynamics Pack doesn’t bring extra weight to its light action. As a driver’s car, though, the Jaguar is arguably the best in class.

Rival: BMW 530d The 5-Series has grown up. It rides better than ever before and also features a stunning engine. But while the 530d is technically a big step forward – for both the model and the class – it’s not as exciting to look at as the tweaked Jaguar.