Fresh styling and cleaner, more efficient engine aim to take compact exec to the top of the class 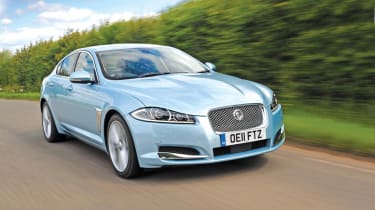 Jaguar has finally given the XF the face it deserves and the engine it really needed. At last, it’s a viable proposition for the business buyers who couldn’t justify the expensive-to-tax V6 version. However, while the car’s beauty is unrivalled and the new entry 2.2-litre diesel is a gem, the revisions aren’t enough to take the Jag back to the top of the class. It’s neither as clean nor as economical as rivals. But that said, there is no cheaper Jaguar to run

As a former Auto Express Car of the Year, the XF needs no introduction. However, it’s no longer top cat in the executive car class, having been usurped by the latest BMW 5-Series and, more recently, the new Audi A6. In an attempt to claw back lost ground, Jaguar has significantly revised its best-seller.
There’s a fresh look, a revamped cabin and, most importantly, an all-new entry-level 2.2-litre four-cylinder turbodiesel engine with stop-start technology. The first thing that grabs you about the updated XF is its new headlamps, which resemble those on the XJ, complete with LEDs arranged in a ‘J’ pattern. As a result, the car now looks as jaw-dropping as the C-XF concept that previewed it in 2007.

Video: watch CarBuyer's video review of the Jaguar XF
[[{"type":"media","view_mode":"content_narrow","fid":"68287","attributes":{"alt":"","class":"media-image"}}]]
Other changes include a redesigned grille, sculpted bonnet and streamlined wings, as well as revised tail-lights. The whole package is extremely elegant, and sets the Jaguar apart from its clinically styled German rivals.
Inside, there are new sturdy satin-feel switches, which are pleasing to the touch and the eye. Further cabin updates include a revised full-colour touchscreen and new seat choices. Until now, Jaguar hasn’t offered a four-cylinder diesel, and this always left a massive hole in the XF range. With CO2 ratings driving company car sales, not having one in this class was like opening an ice-cream
parlour and not selling vanilla.
So does the new 2.2-litre deliver?
From a driver’s point of view, it’s great. Performance is strong, overtaking effortless and, even when worked hard, diesel clatter is minimal. Plus, it works well with the smooth-shifting eight-speed auto, which is relaxing in full automatic mode, and fun when you take charge with the steering wheel paddleshifters.
But here lies the problem. Torque converters impair efficiency, and this is partly why the Jag emits 20g/km more CO2 than either a BMW 520d or Audi A6 2.0 TDI. That means it will cost company buyers on the higher rate of tax up to an extra £605 in benefit-in-kind payments.
Fuel bills will be steeper, too. While Jaguar claims 52.3mpg, our car averaged only 35.8mpg during a period of sedate extra urban driving.
Then there’s the price. Despite the new entry-level engine, the XF still starts at up to £1,520 more than a 5-Series – although you get a lot more kit for your money.
As for the rest of the car, it’s business as usual. That means good high-speed comfort, a well insulated cabin, sharp steering and an agile rear-wheel-drive chassis that can entertain on a twisty road.
Sadly, the same negatives remain, too. The low-speed ride isn’t great, rear headroom is a little tight and the boot is the smallest in the class, unless you forsake the space-saver spare wheel.
And this rather neatly sums up the XF – it’s a great car, and the revisions broaden its appeal, but buying one still means making a few compromises.
Share this on TwitterShare this on FacebookEmail