We head to Frankfurt for a ride in the Big Cat that everyone has been talking about. 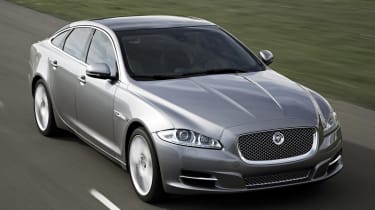 When the XJ hits showrooms early next year it will be available with a choice of four trim levels, three engines and a pair of body styles. Entry-level models wear the Luxury badge, but there are also Premium Luxury and Portfolio models, as well as the flagship Supersport. The latter is the only available with the firm’s 503bhp supercharged V8 engine, but lower down the range buyers can choose between the normally aspirated 5.0-litre V8 and the firm’s 3.0-litre V6 diesel.Prices start at £55,900 for the entry-level oil burner and long wheel base models command a £3,000 premium. As a result the flagship Supersport LWB costs £88,000 so the XJ also looks set to face competition from the Porsche Panamera, but on the basis of this test ride, it's every inch the sumptous but sporty Jaguar.

All-new Jaguars don’t leap out at you every day, so when Auto Express was invited along for an exclusive ride in the new XJ at the Frankfurt Motor Show, we jumped at the chance!

Back in July we were invited along to the live unveil, but now we're about to get up-close with Jaguar's latest stunner for the first time.

The flagship saloon has some stiff competition, with the ever-green Mercedes S-Class and fresh-faced Porsche Panamera forming an intimidating welcoming committee. From the moment the big Jaguar glides into view it grabs your attention. Its striking looks are even better in the metal than in our photos and its protruding grille and sleek profile set it apart from its German rivals.

The long wheel-base model sent to meet us measures more than 5.2m long but it disguises its extra 125mm over the standard car and is an imposing kerbside presence. Up close you notice the dark trim panels on the rear pillars, which are designed to create the impression of a wraparound rear windscreen. This was impossible to achieve properly because of the profile of the back window, and the visual trick works better in some colours than others.

When you open the boot to stash your bags the load area looks smaller than the figures suggest, but its 520-litre capacity should be more than adequate. Climb aboard and space isn’t an issue. Predictably, given our model’s extra-long platform, there is a huge amount of rear legroom. The amount of headroom is less generous thanks to its rakish roofline, but six-footers will still fit in the back. Smart airplane style tables fold down from the front seatbacks and will be familiar to owners of the outgoing XJ, but the most striking thing as you relax in the contoured leather seats is just how light the interior feels.

With its narrow side windows you expect the cabin to feel snug, but the explanation is simple as all XJs come with a panoramic sunroof as standard. It helps to liberate more headroom inside and allowed design boss Ian Callum to preserve the car’s low slung coupe-like profile. And it gives the Jaguar a handy USP over its rivals.

Before pulling away we were also treated to a demonstration of the top-of-the-range 1,200 Watt Bowers & Wilkins audio system that comes as standard in Portfolio trim. With 20 speakers – including no less than three in each door – the power and clarity of the stereo needs to be experienced to be believed. And it’s all controlled using one of the best touch-screen interfaces that you’ll find inside a car.

Peer between the front seats and you can also see the new virtual instruments, which display analogue dials on a digital screen and look surprising authentic. The steering wheel through which you view them is also beautifully crafted and makes you want to grab hold of it. Likewise, all of the materials inside, from the classy chrome on the eye-ball style air vents to the high quality wood trim and suede rooflining are tactile delights.

This is all very well, but what it’s like on the move? Well, on the evidence of our short test ride it promises to give the current class champions a run for their money. The creamy smooth V8 power delivery, purposeful engine note and hushed refinement of our test car are what you expect from a luxury limousine. However, lower spec 3.0-litre diesel versions need to be just as impressive if the XJ is to seize the luxury car crown.

Ride comfort on the smooth tarmac of our test route was also promising and while it’s impossible to judge the car’s handling without taking the wheel, the XJ feels controlled from the back. All we need to do now is have a go ourselves to find out if a Jaguar is about to leap back to the top of the luxury car class.

Rival: Mercedes S-Class Our current luxury class favourite does exactly what all hi-tech limousines should do – it soothes away the stresses of driving. The XJ will have its work cut out to beat it.