Six-new Jeep concepts showcase range of Mopar tuning parts, with a 700bhp resto-mod from 1968 the star of the show 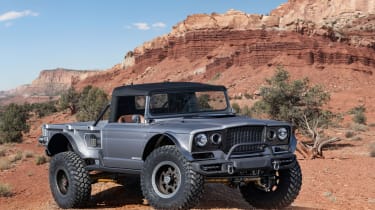 Off-road fans rejoice: it’s that time of year again where Jeep and Mopar team up to show us what they’re capable of when the rules don’t apply.

Every Easter marks the Moab Easter Jeep Safari, which Fiat-Chrysler’s off-road brand usually celebrates with a handful of wild new concepts, and 2019 is no exception. This year, Jeep has created six unique concept cars. The Jeep Moab concepts often rely heavily on Mopar’s back catalogue of parts, but they also showcase some new and prototype pieces Jeep fans may one day be able to get their hands on as well.

This year’s resto-mod concept is the M-715 Five-Quarter. It’s based on an original 1968 Jeep M-715, though it features in-depth chassis and drivetrain modifications. Jeep has focussed on modernising the M-715’s appearance with LED headlights and running lights, while a new six-foot long custom pick-up bed fabricated from aluminium has been equipped. The roof sits 3.5-inches lower, for a sportier look, while the M-715 Five-Quarter is powered by a supercharged 6.2-litre V8 developing over 700bhp. 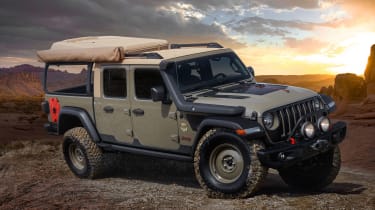 One of five Moab concepts based on the new Gladiator pick-up truck is the Wayout, and as the name suggests, it’s for the adventurer who likes to go far off the beaten path, utilizing the Gladiator’s payload to carry two custom fit auxiliary fuel tanks and a rooftop tent that can sleep two. It’s painted up in mock military ‘Gator Green’ and features a set of 17-inch steel wheels too, shod with proper off-road rubber.

At the other end of the scale is the Flatbill. Designed to merge the desert lifestyle and Motocross world together, it’s equipped with two dirt bikes on its flatbed, and gets a bright motorsport-inspired livery too. It rides on 20-inch custom wheels with 40-inch off-road tyres.

Carrying on with the retro theme is the JT Scrambler, using a throwback colour pallet and graphics of the 1980s CJ scrambler with a white and orange scheme. The colour theme is continued through the interior with Katzkin Amaretto Brown leather seats, bordered in orange thread with the Jeep grille logo embroidered onto the seat belts.

There’s also the bright looking J6 concept, boasting a metallic brilliant blue paint job in homage to the 1978 Jeep Honcho. It features a longer bed making it 201 inches, while the wheelbase stays the same as the standard four-door version of the new Gladiator.

Number six is the Gladiator Gravity. This rock climber themed jeep has been created exclusively with off the shelf Mopar parts and boasts a vibrant orange paint job. The engine has been upgraded with a cold air intake and a cat back exhaust system to enhance horsepower and torque.

Do you like any of the Jeep concepts? Let us know in the comments below...