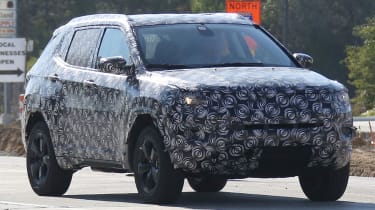 Jeep's range revolution continues, as our snappers have spotted the firm's new mid-sized SUV testing on Michigan roads. Set to take on the Mazda CX-5 and most probably bring back the Compass name, it'll be unveiled at the 2016 Geneva Motor Show.

It's the fourth part of a recent mass overhaul of the Fiat-owned firm's lineup that saw an all-new Cherokee and Grand Cherokee hit showrooms last year. 2015 then saw the launch of the Renegade, an important B-segment car to take on the Mazda CX-3.

Fitting between the new Renegade and existing Cherokee, the Compass will be the next step in Jeep’s rejuvenated product range, with the final being the Grand Wagoneer Range Rover rival in 2018. Having been declared bankrupt as part of Chrysler in 2009 it’s been a long struggle, but after enjoying 23 months of growth up to July 2015, the rough-and-ready SUV maker is on the up. 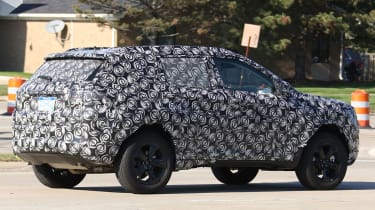 Details are thin on the ground so far, but expect the Fiat-sourced Multijet four-cylinder diesels and Multiair turbocharged petrols to make their way across. a six-speed manual and the new nine-speed auto should be shown. Like the Cherokee, it should be available with front or four-wheel drive too, and should be top of the class for off-road performance considering Jeep's heritage.

While there’s no information on further models, a company insider did insist there was no intention to diversify into smaller hatchbacks or more conventional saloon cars. That will remain a focus for Fiat and Alfa Romeo, but isn’t on the cards for 4x4-friendly Jeep.

We’ll get our first undisguised glimpse of the Compass early next year, before a full reveal at the Geneva show.

Are you looking forward to the new Compass? Let us know below...