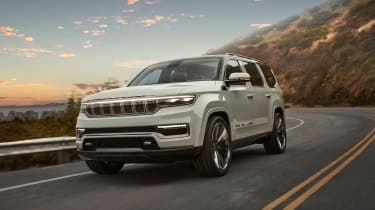 This is the new Jeep Grand Wagoneer. It’s a reimagined version of the company’s original, flagship SUV from 1962, which will go on sale in the US early next year. There’s no word yet on whether the SUV will be sold in the UK but, when it reaches the American market, it will act as a premium rival for the BMW X7, Audi Q8 and the Range Rover.

Although technically a concept for now, the Jeep Grand Wagoneer’s styling is clearly influenced by the Grand Cherokee. It shares the same bluff front end and boxy panelling, along with a new pair of LED headlamps, a full-length panoramic glass roof, a subtle rear diffuser and a set of 24-inch multispoke alloy wheels.

As a nod to the original Grand Wagoneer, which featured wood panelling along its flanks, the headlights on this new model are cradled in genuine teak wood. The tie-down loops on the SUV’s roof rails are also trimmed in teak, while the outer edge of the instrument panel features an inscription, which marks the launch date of the classic Wagoneer.

Inside, there’s seating for seven and a unique two-spoke steering wheel, which Jeeps says pays tribute to the unit fitted to the original Wagoneer. Jeep has also built the SUV’s interior with sustainability in mind – the car’s dashboard features recycled glass, heat-treated lacewood and aluminium, while its headlining is made from man-made Dinamica suede.

Jeep hasn’t scrimped on technology, either. The Wagoneer’s cockpit features almost 45 inches-worth of display screens, with 12.3-inch digital instrument cluster, a 12.1-inch central infotainment system, a 10.25-inch screen for the car’s climate controls and an extra 10.25-inch monitor mounted on the passenger-side dashboard. 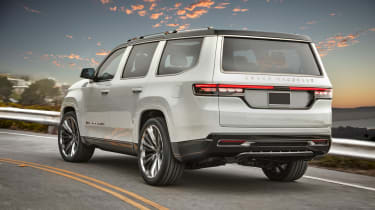 The tech-fest continues in the rear of the Wagoneer, with another 10.25-inch climate control panel and a pair of 10.1-inch infotainment screens to service each of the individual captain’s chairs. Jeep completed the Wagoneer’s entertainment setup with a 23-speaker McIntosh premium audio system and a 24-channel amplifier.

Jeep hasn’t yet released a full technical information on the Grand Wagoneer’s platform and powertrain – but here’s what we know so far.

Jeep has confirmed that the Grand Wagoneer will be powered by a plug-in hybrid powertrain which will feature a four-wheel-drive system and a pure-electric mode.

However, the physical setup of the Wagoneer’s powertrain is yet to be announced. It could employ a system like that on the Renegade 4xe, with a combustion engine driving the front wheels and an electric motor powering the rear, or a fully mechanical system like the Wrangler 4xe’s. That uses an electric motor sandwiched between the engine block and the automatic gearbox that sends drive through a conventional four-wheel-drive system.

Like the Grand Cherokee, the Grand Wagoneer will ride on Jeep’s Quadra-Lift air suspension system, which will allow the driver to adjust the SUV’s ride-height depending on the trail conditions. Unlike the classic Wagoneer, there’s also independent suspension front and rear, rather than solid beam axles.

Jeep is yet to confirm prices for the Grand Wagoneer but, given the market at which the SUV is being aimed, a figure in excess of £100,000 is possible – making it, by far and away, the most expensive model the American brand has ever produced.

Speaking several years ago at Paris Motor Show, Jeep boss Mike Manley told Auto Express: “I don’t think there’s a maximum price ceiling per se for Jeep. If you look at the upper end of the market in the US, for me, the Grand Wagoneer done well can compete all the way through the segment.

Looking for a big 4x4 with plenty of space? Check out the best pick-up trucks here...

Plug-in hybrid Jeeps will be on sale soon, and new boss Christian Meunier tells us what’s so exciting about them
Jeep 2022 small 4x4 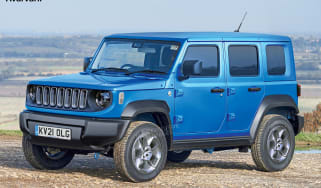