Kia has recently launched a new version of its practical MPV, making the old MkII model look even better value 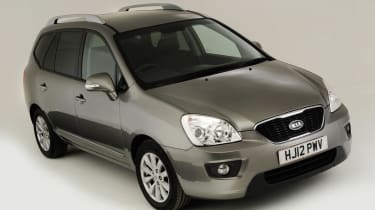 When the MkII Carens made its debut in 2006, we said: “It’s fantastic value, a massive step forward from the car it replaces and a serious contender in the compact MPV sector.” Seven years later, the Kia is still a fine choice for families – and although the new version has made another big step forward, this outgoing model is still a lot of car for the money. Even better if you can buy a post-January 2010 example, because these came with a seven-year warranty rather than the five-year deal on earlier cars.

The people carrier is losing its appeal on the new car market as motorists switch to crossovers. But this is great news for used MPV buyers, as it means there are some brilliant bargains – and few cars can rival the second-generation Kia Carens for value, especially as it’s just been replaced.

When new, the five or seven-seater offered a lot for the money, and steep depreciation means you get even more bang for your buck second-hand. Look beyond the awkward styling, and you’ll find a comfy car with plenty of space.

The original Carens went on sale in the UK in 2000, with this MkII car arriving in autumn 2006. From the outset, there were 2.0-litre petrol or diesel engines, with five or six-speed manual gearboxes respectively.

However, the diesels had the option of a four-speed automatic, too, and from March 2008 this box was also offered on the newly introduced 2.0 LS. The only other developments during the Carens’ seven-year lifespan were the introduction of a 1.6 petrol engine in February 2009 and the launch of a 126bhp 1.6 CRDi diesel in January 2010.

The Carens competes against some talented cars, not least the Vauxhall Zafira. This versatile, well equipped seven-seater is cheap and in plentiful supply, and ideal for the budget conscious. Buyers wanting a sportier drive will love the Ford S-MAX, which is spacious and readily available.

However, it’s a big car and can be expensive to run. The Toyota Verso and VW Tiguan are more costly than the Kia, but they’re solidly built and come with some strong engines. If your focus is on value, check out the Renault Scenic and Grand Scenic, plus the Citroen C4 Picasso, which offer great versatility at a tempting price.