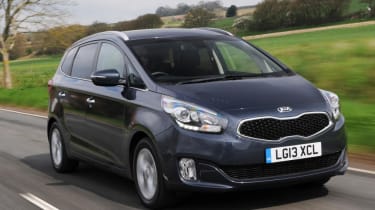 Although the Kia Carens was on sale in one form or another for almost two decades, relatively few people have heard of it. Don’t let that put you off, though, because the third and final iteration was a genuinely good car even if – like any other MPV – it was never going to raise your pulse rate. Comfortable, well equipped, reliable and eminently practical, the Carens is definitely a 5+2 rather than a true seven-seater, because the third row is too cramped to be used by adults or lanky teenagers. But with Kia focusing on the right areas, it’s a truly family-friendly car that’s safe, spacious and affordable to buy as well as to run, which makes it a winner in many books.

With SUVs now making up around a third of all new-car sales, it’s easy to forget that people carriers were once the darlings of the dealer forecourt. And, just as off-roaders started at the larger, more expensive end of the market before trickling down to crossover size and smaller, MPVs began at the bigger end of the market, too, until their popularity prompted makers to begin selling smaller, more affordable versions.

The third-generation mid-size Kia Carens arrived as MPVs were being well and truly eclipsed by SUVs, but should its slightly unfortunate timing rule it out for buyers looking for a sensible, practical family car? 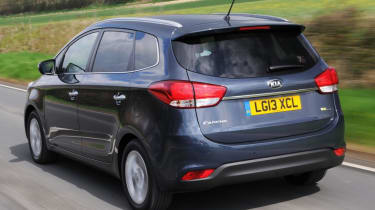 The first Carens arrived in the UK in February 2000, with an all-new Mk2 making its debut in May 2006. That was replaced in May 2013 by the third-generation Carens, which came with a choice of 1.6 GDi petrol or 1.7 CRDi diesel engines. The latter came with either 114bhp or 134bhp, with the higher-powered engine the only one to be offered with a six-speed automatic transmission.

All other Carens had a six-speed manual gearbox fitted, while there were three trim levels offered: 1, 2 and 3. Seven seats were standard across the range. A facelifted Carens reached the UK in November 2016 with a refreshed exterior, improved infotainment and an Eco Pack option for the 114bhp diesel. This featured a stop/start system, revised gear ratios and low-rolling-resistance tyres that cut CO2 emissions to 109g/km.

Diesel versions make the most sense because the petrol unit isn’t very perky, and it’s less economical than the diesel. The high-powered diesel is usefully more muscular; the automatic gearbox works well enough, but blunts both performance and economy. 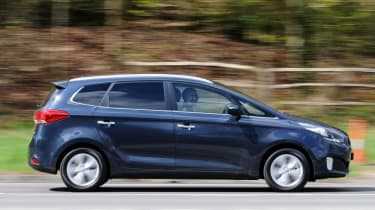 Alternatives to the Kia Carens

The Vauxhall Zafira is an affordable seven-seat mid-size MPV that’s plentiful with a wide model range. Ford’s S-MAX is stylish, well equipped and more fun to drive. There are also lots of these to choose from, but it’s a big car; the S-MAX is a similar size to the Galaxy, which you should consider if you need to regularly carry six passengers. The Mazda 5 and Toyota Verso both have a lower profile and there are fewer on the market, but they offer practicality and reliability.

You should also think about a Renault Grand Scenic, as well as a Citroen C4 Grand Picasso. Don’t overlook the Volkswagen Touran either; it comes with efficient engines and is very user-friendly.

Some early cars came with distorted windscreen glass, but a new screen should have been fitted to them by now.

The rear suspension has been known to squeak, especially in dry weather. Lubricating the bolts and bushes can help resolve this issue.

Some pre-facelift cars can suffer from infotainment glitches, such as phones refusing to pair over Bluetooth and outdated nav maps.

If you opt for a petrol-engined Carens, the towing limit will be 1,300kg. If you need more, a diesel engine bumps this up to 1,500kg. 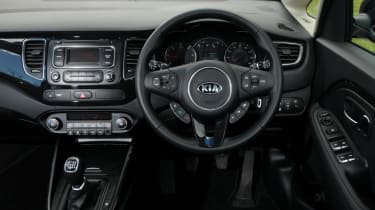 All Carens have seven seats, but the third row is suitable only for children. The middle row folds in thirds, while the back seats have a 50:50 split. All cars come with a height-adjustable driver’s seat and the steering wheel adapts for reach and rake. Cubby space is good, and the build quality is strong. Boot capacity is just 100 litres with all seven seats in use, or 492 litres with the third row folded.

The Carens came with a seven-year or 100,000-mile warranty. You get the balance of that when you buy a used one, or the full seven years if you buy an approved-used car from an official dealer. If you’re lucky, you’ll find one with the balance of pre-paid maintenance; Kia sold three-year (Care-3) or five-year (Care-3 Plus) packages. 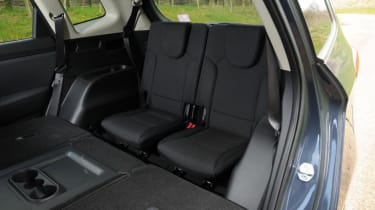 Servicing for all engines is every 12 months or 20,000 miles, alternating between minor and major. A minor check-up costs £69 for both motors, while the major is either £249 or £329 for the diesel (second and fourth services) and £219 or £309 for petrols. Both units are chain-driven, so there’s no cambelt to replace.

Impressively, the third-generation Kia Carens hasn’t  been the subject of any recalls. Even the original model has only been recalled once, while its successor had just two campaigns: one in 2009 and the other in 2013.

In the six years since the Carens Mk3 reached the UK market, Kia has issued just eight recalls across its entire model range for cars built within that period, and each of them affected just one model only.

The Carens hasn’t appeared in our new or used Driver Power surveys, but Kia as a brand had seven models in this year’s new-car poll. All were inside the top 30, with four in the top 20. Their scores are boosted by excellent reliability ratings and low running costs, while comfort and infotainment are winners. It’s usually the engine, gearbox and handling that see Kia’s cars criticised.