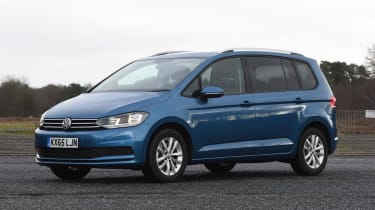 The Touran isn’t the cheapest compact MPV around and it’s up against some tough opposition, which includes Volkswagen’s own Sharan. This is well worth a look if you plan to use all seven seats on a regular basis because, as with most compact MPVs, the Touran’s third row is only really suitable for children unless the journey is short. Online reviews and forum posts about the Touran tend to be something of a mixed bag, though. Some owners praise its practicality and design, while others say they’re disappointed with poor dealer service, plus the car’s reliability and value. Only you can decide whether or not the Touran offers reasonable value, but it comes with some excellent engines and offers impressive usability, which is what MPV buyers tend to want the most.

People carriers have fallen out of favour in recent years, with buyers shifting to SUVs. That’s a shame, because many are more practical and versatile than the typical SUV, making them perfect family transport.

Volkswagen was rather late coming to the compact MPV party with its Touran in 2003 and, by the time that car was replaced in 2015, the MPV market was fading.

In typical VW fashion there’s little about the Touran to excite but, if you buy the right engine and trim for your circumstances, you might just find it’s an ideal family car. 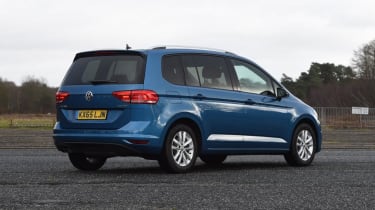 Order books for the second-generation Touran opened in September 2015, with prices starting at £22,240. Buyers could choose between 1.2 and 1.4 TSI petrol engines, as well as 1.6 and 2.0 TDI diesels, and S, SE, SE Family and SEL trim levels.

All engines came with a six-speed manual gearbox as standard, and a DSG twin-clutch auto was optional with all but the 1.2. From February 2016, the 1.4 TSI and 2.0 TDI engines were offered with R-Line trim, which brought sportier styling inside and out.

In June 2016, the 1.6 TDI unit got a small boost, with power increasing from 109bhp to 114bhp, although you’d be hard-pressed to tell the difference on the road.

All of the engines and transmissions in the Touran are strong but, if you regularly load up with seven people, you’ll want the bigger unit, regardless of whether you opt for petrol or diesel. The smaller engines really only suit people who aren’t in any hurry. 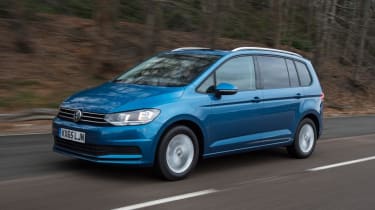 Unless you’re happy with steel wheels, the basic S trim is best avoided, although it does get an eight-inch touchscreen, a DAB radio, Bluetooth and air-con, along with all-round electric windows and electrically heated and adjustable door mirrors.

Alternatives to the Volkswagen Touran Mk2

For value it’s hard to beat the Vauxhall Zafira Tourer, which is brilliantly flexible, good to drive and well screwed together, while there are also plenty of engines and trim levels to choose from. Prices are lower than for equivalent Tourans, too.

Another good-value compact MPV is the Renault Grand Scenic (from 2016 on), which can carry seven and offers decent luggage space; there’s also a five-seat option.

The Toyota Verso (2013-2018) is worth a look, too, because it’s solidly built, versatile and good to drive. Kia’s Carens is a cheaper option, while the BMW 2 Series Active Tourer is more of a direct rival for the Touran. Alternatively, you could go for a seven-seat SUV, such as the Land Rover Discovery Sport, Skoda Kodiaq or Nissan X-Trail.

Few Mk2 Tourans are old enough to be outside their original new-car warranty, so dealers should still fix any faults for free.

The 2.0 TDI diesel engine comes in 148bhp and 187bhp forms; both offer plenty of muscle for everyday use thanks to decent torque.

The Touran was crash tested by Euro NCAP in 2015 and rated the safest compact MPV, offering strong child and adult occupant protection.

The Touran S doesn’t have Autonomous Emergency Braking, but it’s standard from SE trim up – and worth having. 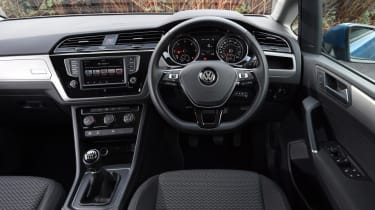 There are no surprises here, with everything just as you’d expect in terms of clear design, high-quality materials and a user-friendly layout. The SE Family’s glass roof is well worth having, because it really opens up the cabin. While the Touran is a seven-seater, it’s best seen as a five-seater with an extra pair of occasional seats or a massive boot, which holds 1,857 litres with all the rear seats folded flat.

Owners pick fixed or variable servicing. The latter gives up to two years and 18,000 miles between check-ups; the former cuts this to one year/10,000 miles. Service plans must be started before the car has 10,000 miles, while fixed-price services after the car’s third birthday alternate between minor and major (£179/£349). 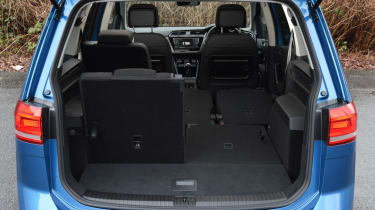 The Touran Mk2 has been recalled four times. Firstly, in January 2017, pre-October 2016 cars had possible lighting problems, while potential faults with the airbag and seatbelt pre-tensioners caused a March 2017 recall.

The most recent campaign, in November 2018, was for panoramic sunroof lighting. Six months earlier, another covered cars built in 2018 with faulty head restraints.

The Touran didn’t appear in our most recent Driver Power satisfaction surveys, but there are a few reviews on carbuyer.co.uk. While owners often use this forum to sing the praises of their cars, some buyers are less enthusiastic and give their Tourans just one or two stars out of five thanks to build glitches, high purchase costs and poor economy. Still, others say it’s a fine family car.