Has latest-generation Volkswagen Touran shaken off staid and sensible image? 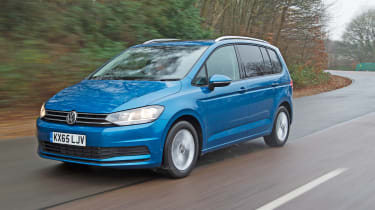 The latest VW Touran is bigger, more stylish, better to drive and delivers greater refinement than before. It also comes well equipped, is good to drive and is solidly built. If you’re looking for a solid, sensible and no-nonsense MPV with a dash of premium appeal, then the Touran fits the bill. It just lacks the flair and imagination of many rivals, plus it’s not exactly cheap to buy.

In recent years, the VW Touran’s become the forgotten car of the compact MPV class. Launched in 2003, the original mixed practicality, quality and low running costs. However, its sober styling and straight-laced character meant it was soon overtaken by more distinctive rivals such as the Citroen Grand C4 Picasso and Renault Grand Scenic.

• Best MPVs and people carriers on the market

Now, though, there’s an all-new model that aims to give the sensible seven-seater a welcome injection of desirability. Based on the brand’s clever MQB underpinnings, the newcomer also boasts more space, a lower kerbweight and improved efficiency. So has VW done enough to lift the Touran from obscurity and into the spotlight? 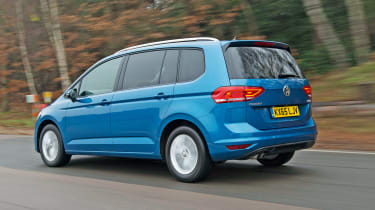 Well, there’s no denying that the MPV looks sharper than before, even if the designers haven’t strayed too far from the old car’s ‘box on wheels’ template. As with the smaller Golf, the Touran benefits from VW’s latest chiselled family face, while sharp creases cut into the sides help create a more dynamic style than before. Even so, the MPV still looks a little bland when parked alongside the flamboyant Citroen.

More effort has been put into the interior, where the old car’s ‘cliff face’ dash has been replaced by a slicker, wraparound design. Top-notch materials are used throughout, while the build quality is easily a match for that of the BMW 2 Series Gran Tourer. More importantly, thanks to a 130mm increase in external length, there’s more space inside.

The middle row has three individually sliding seats (two standard-sized chairs sit either side of a narrow central one), each of which features an Isofix mounting. Access to the third row is fairly straightforward as the middle seats slide and tilt in one easy movement. However, once there you’ll find head and legroom are extremely tight for adults, and these seats are best reserved for small children. 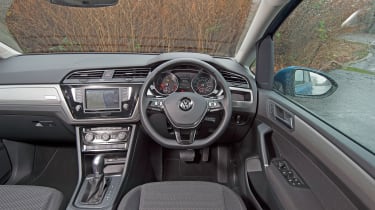 Elsewhere in the cabin there are plenty of handy features, including a large glovebox, a handy lidded dash-top compartment, a small cubby to the driver’s right and four vast door bins – although, unlike in the Golf, they have no flock lining, which means loose items rattle around. The SE Family as tested benefits from rear window blinds, fold-out tray tables on the backs of the front seats and a panoramic sunroof, too.

Also, a neat voice-amplification system for the rear compartment ensures that the driver can be heard without having to turn around and take their eyes off the road.

Not that you’ll need this kit, because the Touran is impressively refined. The 2.0-litre TDI idles quietly and remains subdued even when worked hard. And while you’d struggle to call the VW fast, it feels brisk enough in everyday traffic. It’s helped by the six-speed box, which shifts up early to make the most of the unit’s healthy 340Nm of torque. Some of the changes can be a little lazy, but in the main the transmission is smooth and responsive. 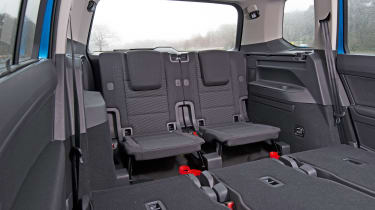 Wind noise is well suppressed, and for the most part the Touran rides well, with only sharp ridges and potholes upsetting its composure and sending a shudder through the cabin. In corners, there’s precise and naturally weighted steering, decent grip and strong body control. It’s not exciting, but it feels more agile than the Citroen.