Does all-new Kia Cee'd finally have what it takes to challenge the Golf and Focus? 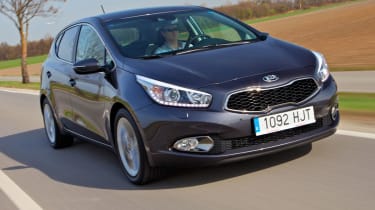 Kia can now cut it with the big boys, and the new Cee’d is about more than just a seven year warranty. It’s stylish, spacious and nicely built. The engines are efficient and refined and the ride’s comfortable. Don’t go expecting a rewarding driving experience and you won’t be disappointed – for 80 per cent of people for 80 per cent of the time, the new Cee’d could be exactly what they’re looking for.

Advertisement - Article continues below
Kia is at that ‘difficult second album’ stage. Its latest cars have been critically acclaimed, but can it move the game on further to challenge the very best?
The second-generation Kia Cee’d follows hot on the heels (in car terms) of the original car, launched just five years ago. The big challenge for Kia is to produce a car that’s famous for more than just its seven-year warranty. This could just be the car to do it.
Video: Watch our video review of the new Cee'd
[[{"type":"media","view_mode":"content_narrow","fid":"68819","attributes":{"alt":"","class":"media-image"}}]]
In a conservative market dominated by the Ford Focus and VW Golf, the Ceed’s style is certainly a cut above its rivals. Kia’s ever growing ‘Tiger’ grille is surrounded by oversized headlamps (with integrated LEDs) that swoop around the sides of the car. The profile with its low nose and high rear is very Astra-like, while the back is equally pretty with rear lamps that sit slightly proud of the bodywork.
Open the front door and you’re greeted by an attractive, well-built, strongly specced and roomy interior. The Cee’d has grown in length by 50mm (but reduced in height and width, both by 10mm), which equates to 21mm more legroom in the back, and 12mm more headroom. This is a seriously spacious small car, with more than enough room for four (five at a pinch) above average-size adults to travel in comfort.
The boot has grown, too, and at 380 litres is 64 litres larger than the boot of a Ford Focus. With the rear seats flipped up, the backrests fold flat for a total of 1318 litres of space, over 200 more than the Focus.
The new dash features plenty of soft-touch plastics in all the right places, although some of the lower-spec cars we tried still had low rent hard plastic across the dash – higher-spec cars get glossy black or silver effect plastic and look really up market. But when will Kia finally ditch the indicator and wiper stalks that look and feel like they’ve come from a 1970s Datsun?
At last, though, Kia is competing with the best on tech, whether you’re talking self parking systems, connectivity, navigation or full length (and opening) panoramic sunroofs. We’ll know more about trim levels and kit closer to the Cee’d’s June launch, but the old model was pretty generously specced and we’d expect that trend to continue.
What we do know is that the Cee’d will come with two diesels and three petrol engines. The diesels are 89bhp 1.4 and 126bhp 1.6, while entry-level cars will be 99bhp 1.4 petrol and there’s also a 1.6 petrol with 133bhp and available with a new double-clutch automatic gearbox.
We drove the larger diesel, which wasn’t exactly a ball of fire. Acceleration feels a little sluggish and although there’s a decent slug of torque at around 2000rpm, you’ll be better off dropping down a gear through the nicely weighted gearbox.
The engine’s a bit growly, too, especially around town – the smaller (but less frugal) 1.4 is smoother and more refined. However, Kia claims average economy of 76mpg and 97g/km for the 1.6D, which isn’t too bad.
In spite of talk of improvements to the multi-link rear suspension and MacPherson struts at the front, the new Cee’d isn’t a sharp handling car – it’ll lean a bit through corners and feels nose heavy. The steering makes things worse, feeling overly light and needing constant little corrections at the straight ahead on the motorway. It doesn’t offer linear inputs as you turn the wheel, too, while the option of normal, sport or comfort modes for the steering only confuses things.
But if you care little about how your car handles and prefer a relaxed, comfortable ride, then the Kia scores highly – it handles bumps and ruts okay, with just a hint of firmness. However, it’s sensitive to tyres: the cars we tested were fitted with Hankooks or Continentals, the former adding an extra degree of firmness.
As with trim levels, prices will be announced closer to June, but Kia hopes they’ll start from around £14,500 and settle at around 5 per cent less than the equivalent Focus. But don’t forget that every Cee’d comes with something no other rival does – a seven-year warranty.
There’ll be more Cee’d action later this year, too, with the estate arriving in September and then a three-door Pro_cee’d being shown at the Paris Motor Show at the end of that month – it’ll be more coupe than three-door according to Kia, and come with the 184bhp 1.6 turbo engine from sister company Hyundai’s Veloster coupe.
Advertisement
Share this on TwitterShare this on FacebookEmail
Advertisement