The Kia Optima PHEV is the brand's first plug-in hybrid, so how does it compare to its rivals? 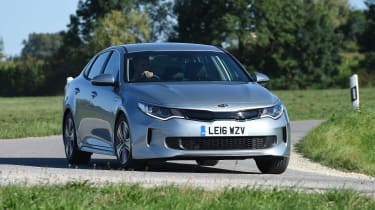 As we start to move away from the early adopter phase in the evolution of plug-in car tech, it’s getting less acceptable for cars like the Kia Optima PHEV to be so expensive. The Kia costs nearly as much as the excellent BMW 330e, which is better to drive, more upmarket inside and more practical too. The Kia is comfortable, efficient and has lots of kit, but it’s just too pricy to buy.

The Kia Optima PHEV is the brand’s first plug-in hybrid model, a type of car that’s supposed to offer the environmental and economy benefits of an all-electric powertrain without the range anxiety.

However, our previous experience with PHEVs suggested that the claimed 176.6mpg economy figure might not be realistic. That certainly rang true on our test drive, where we weren’t even able to test the electric-only mode as the battery ran too low.

At least, with a theoretical all-electric range of 33 miles it would be possible to keep use of the petrol engine down by charging the Optima PHEV up every day. Plus, CO2 emissions of 37g/km mean it’s free to tax, is exempt from London’s congestion charge and delivers low company car tax for a triple whammy of cost savings. 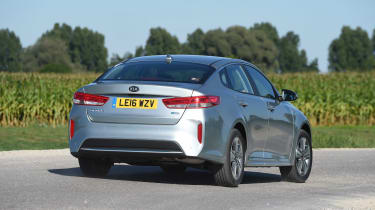 It’s not cheap to buy, mind: at £31,495 after a £2,500 Government grant, it’s only slightly cheaper than the excellent BMW 330e plug-in. That’s stiff competition, especially as the BMW is significantly faster without a big hit to economy. The BMW’s shorter all-electric range is is the only saving grace for the Optima PHEV.

The Kia uses a 2.0-litre naturally-aspirated petrol engine along with its electric motor and, with a total of 202bhp, it manages the 0-62mph sprint in 9.4 seconds. Thanks to the electric motor it does still feel torquey at low speeds, like a turbocharged engine would. That means the PHEV is good for driving in town and in traffic (gliding silently in EV mode) but starts to fall behind at higher speeds on the motorway.

Unlike many CVT gearboxes used in hybrids, the Optima’s six-speed dual-clutch unit is smooth and civilised. The whole driving experience is clearly focused around comfort, as while the PHEV is easy to drive, it’s not as sharp in the corners as its (lighter) non-hybrid siblings.

The steering is well weighted, but it’s not as responsive as the Sportswagon’s and the extra weight of the batteries means it’s less willing to change direction quickly. The ride isn’t noticeably worse than the estate’s, with the PHEV still soaking up bumps well but it’s not as smooth as the similarly-priced (though not plug-in) Lexus IS 300h. 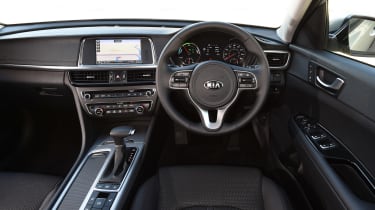 Inside there are relatively few reminders of the advanced powertrain, with the revised instrument cluster in front of you being the main reminder that there’s an electric motor on board. The rest of the interior is very similar to that of the standard Optima, with plenty of rear legroom and headroom as well.

The boot isn’t quite as expansive, thanks to the extra space needed for batteries. With 307 litres in the back, there’s 203 litres less than the standard Optima saloon. That’s to be expected in a plug-ins but it doesn’t change the fact that a standard diesel will be more practical - and quite a bit cheaper, too.