Kia gives its Optima range a racy lift with 242bhp GT version, but is the drive transformed? 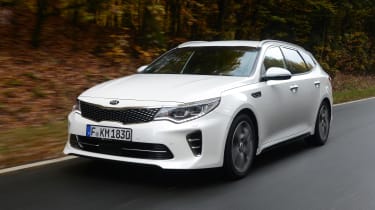 The Optima GT is a curious car, but it’s more likeable than you might expect. The punchy new engine and chassis revisions are enough to give it a different character to the standard Optima, and on first impressions it remains a decent cruiser. However, its thirsty petrol engine and the fact that it’s more warm than ‘hot’ means it’s likely to be a rare sight on British roads. It’s a shame that Kia doesn’t plan a faster diesel version, which would stand a better chance of catching the eye of UK buyers.

Fast family cars with mainstream badges are a rare breed nowadays. Skoda will sell you the entertaining Superb 280, and while Ford no longer offers a Mondeo ST there’s still a potent 237bhp version available. But that’s about it.

Yet Kia has seen a market opportunity to spice up its Optima range with a new, more powerful GT model – and we’ve been driving it for the first time in Sportwagon form.

Forget the GT-Line S. This full-fat GT isn’t merely a glorified trim level with a bit of sporty design tinsel. Kia, under the watchful eye of former BMW M’s engineering chief Albert Biermann, has given the competent but unexciting Optima a complete overhaul to make it worthy of the same badge as the Cee’d GT warm hatch.

Chief among the changes to the GT is a new 2.0-litre turbocharged four-cylinder petrol engine. Producing 242bhp and 353Nm of torque, it’s enough to propel the family wagon from 0-62mph in 7.4 seconds and on to a top speed of 149mph. That’s quite a way off the Superb 280’s numbers, but it has the better of the Mondeo and other sporty family cars like the Mazda 6. 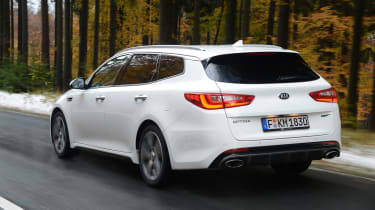 On the road, it’s acceptably brisk rather than devastatingly fast. Max torque arrives at 1,350rpm, meaning decent mid-range thrust and a decent, if not exceptional, turn of speed. It’s enough to make the GT far more enjoyable than the diesel variants, but we can’t help but think another 40bhp would make the Kia’s engine really sparkle. There’s a chance UK cars will get a few performance tweaks that could see power rise to nearly 280bhp, though.

At least Kia has given the Optima a bit of character with a sporty (albeit largely fake) engine note pumped in through the cabin’s speakers. Our only gripe is that the system doesn’t quieten down enough in Normal mode and at lower speeds – where it can become intrusive.

Part of that is down to the six-speed automatic gearbox, which stakes its claim as the sole gearbox choice on the Optima GT. Most of the time it’s smooth-shifting and the paddles are responsive enough, but it sometimes hunts for lower gears at motorway speeds to harm refinement. Skoda’s dual-clutch gearbox is an undeniably slicker operator. 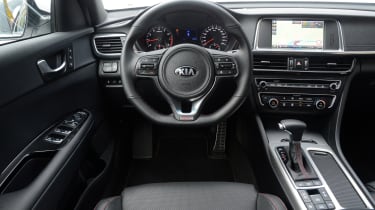 The other issue is fuel economy. The GT will do 34mpg combined, which is considerably thirstier than its rivals on paper. CO2 emissions of 191g/km aren’t much to shout about, either.

Unlike high-end Mondeos and Superbs, Kia hasn’t just slapped a big engine under the bonnet of the standard Optima. There’s been work under the skin to sharpen up the handling. The GT rides 15mm lower than standard, with a new adaptive suspension system, bigger brakes and revised steering aimed to skew the balance of comfort and agility towards the latter.

Although icy weather on our first drive in Germany meant it was tricky to push the Optima to its limits, we could still feel the improvements Kia has made.  It hasn’t quite transformed the Optima into a BMW 3 Series rival, but it does feel keener to turn in, more agile and more planted. It isn’t as grippy as the four-wheel drive Superb, though. Crucially, the changes don’t appear to have compromised ride and refinement too much, although we’ll need to assess that on British roads to make sure. 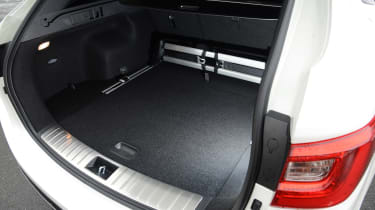 Kia has gone for subtlety as the theme for the exterior look. Don’t go expecting big spoilers or rims; the wheels are only 18 inches, while the solitary clues giving away the GT versions are subtly tweaked bumpers front and rear and twin exhausts. The Optima is already a good-looking car, however. Inside, it’s pretty much the same as GT-Line spec, save for reshaped seats and red stitching – meaning it’s solid and well equipped but not the most spacious in its class.

The Optima GT is expected to start from around £30,000, which might seem a bit steep – but it’s the same as a GT-Line spec diesel with an auto ‘box.