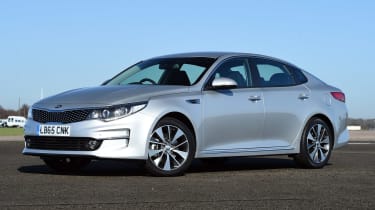 The Optima Mk2 was axed from Kia UK’s line-up earlier this year, but it is available in other markets, and there are a few unregistered cars in the dealer network. Very soon this rather stylish family car will be history as far as UK buyers are concerned. That’s a shame because it offers a refreshing alternative to its more obvious rivals. The problem is that buyers now want SUVs instead of large saloons and estates. But if you prefer a large family car to an SUV, the Optima makes a lot of sense: it’s proving to be as reliable as you’d expect, and offers excellent value, too. And, while the model range is pretty limited, if there’s something that suits your then needs we reckon you’d be mad to overlook the Kia Optima.

Kia is riding on the crest of a wave right now. Launched in the UK less than 30 years ago, the brand was known for cheap-and-cheerful prices and questionable styling. But, from the start, Kia’s products have been reliable and offered excellent value; while nothing has changed there, its quality and design have improved immeasurably over the past decade, and the firm now has one of the more desirable ranges on the market.

Yet as desirable as many of Kia’s cars are, the Optima has never sold in big numbers since its launch in 2012, something that can be ascribed as much to the falling popularity of saloons as anything else. That didn’t stop Kia introducing a sequel four years later, which also saw modest sales despite its wide range of talents.

The second-generation Optima arrived in January 2016, priced between £21,495 and £28,895. Initially offered only in 1.7 CRDi diesel saloon form, there were three trim grades and six-speed manual or seven-speed dual-clutch automatic transmissions. 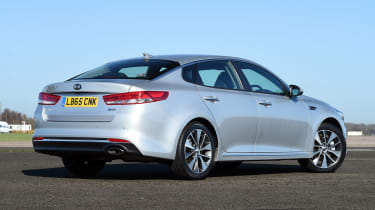 Kia’s first plug-in hybrid arrived at the same time, with a 154bhp 2.0-litre petrol engine and 67bhp electric motor, while the Optima SW PHEV was introduced in September 2017, along with a 2.0 T-GDi turbo petrol model. The range was facelifted in 2018 with a 1.6-litre diesel motor replacing the 1.7-litre, and a fresh nose, extra driver-assistance systems, plus better connectivity.

The 1.6-litre CRDi engine is slightly less muscular than the 1.7 CRDi, but more refined and cleaner. The PHEV carries a big price premium that you may not recoup unless you plug in as frequently as possible.

Alternatives to the Kia Optima

Considering it’s in a fast-shrinking segment, the Optima is still up against plenty of very talented rivals. The most obvious is the Ford Mondeo, which offers masses of space and equipment with ready availability and excellent dynamics. The Vauxhall Insignia is also top value for money, plentiful and spacious, while the Mazda 6 is wonderful to drive, well equipped, has a superb interior and looks smart. 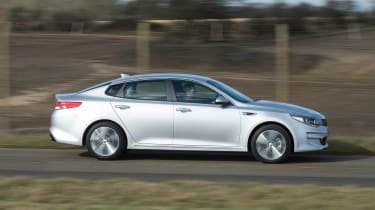 The Kia’s Hyundai i40 cousin doesn’t look quite as neat inside or out, but it’s also great value and roomy. All of these things apply to the Skoda Superb, which is a terrific car with limousine-like levels of interior space, although for some people it’s simply too big, which is why the Skoda Octavia might make more sense, along with its Volkswagen Passat cousin.

Even the earliest Optimas will have three years’ warranty left, which is as much as many models get when bought from new.

The Optima 2 trim level comes with a space-saver spare wheel as standard, but all other models get a tyre mobility kit instead.

Disappointingly, only the GT-Line S model has autonomous emergency braking fitted; it wasn’t available on any other trim levels.

The official fuel economy of the Optima PHEV is 176mpg, but expect more like 50-60mpg. The PHEV can cover 33 miles in electric-only mode.

Kia’s interiors are renowned among owners for being easy to live with on account of their clear and simple design, high-quality switchgear and comfortable seats. The Optima takes all of this to a new level with a cabin that – as well as having these benefits –  also feels rather premium.

As you’d expect from what’s quite a large car, cabin space is generous, with plenty of room for five adults to sit in comfort. That room doesn’t come at the expense of boot space, which stands at 510 litres, while the SW estate model can hold 552 litres, or 1,686 litres with the back seats folded down. 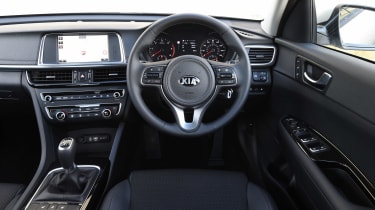 All Optimas need maintenance every 12 months or 20,000 miles, whichever comes first, with services alternating between minor and major. Not all check-ups are priced the same, because minor services can be £59 (for the seventh and ninth services) or £69 (third and fifth) depending on the car’s mileage. Similarly, the cost of the major maintenance fluctuates between £199 (sixth service) and £309 (fourth service).

There are no cam belts to replace because all Optima engines are chain-driven. Brake fluid needs to be replaced every two years for £39, while the coolant should be renewed after 10 years or 100,000 miles, whichever comes first, and then every two years or 20,000 miles; expect to pay around £79 for this.

The Mk2 Optima has been recalled just twice so far. Kia launched the first campaign in June 2018 for 398 Optima PHEVs built between October 2015 and September 2017. These cars were fitted with a voltage-protection device that could switch off the electric motor, leading to a sudden loss of power as the car was being driven. The solution was to fit new control units and a fresh wiring loom.

The second recall was issued in August 2019 and affected 411 Optimas made between September 2017 and May 2019. This time the problem centred on the camera that controlled the autonomous emergency braking function; a software fault meant the affected Kias might fail to identify stationary cars, potentially leading to a collision. A software update was all that was required to put this problem right.

Gauging owner satisfaction isn’t easy, because the Optima is quite a niche car. It has never appeared in our Driver Power surveys, but there are seven reviews on Carbuyer.co.uk, six of which award a full five-star rating, with the seventh giving four stars. As one owner put it: “Brilliant car. Smooth, quiet, spacious and efficient”. Others focus on the excellent value and frugal engine; all agree that the Optima is a winner.