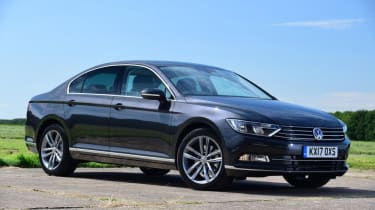 The Passat first joined Volkswagen’s model range way back in 1973, when it was offered only with petrol engines. It was available in Fastback, saloon and Estate forms, and the large family car sold alongside the Beetle, with the Golf and Polo arriving soon afterwards. Since then VW has launched seven generations of Passat, each safer and more efficient, spacious, comfortable and technologically advanced than the last.

It took a while for the Passat to take off in the UK but, by the time the fourth-generation model arrived in 1997, it had become a fleet favourite. Once the Mk8 (codenamed B8) was introduced in 2015, the Passat had become a staple product for private buyers and company car drivers nationwide. 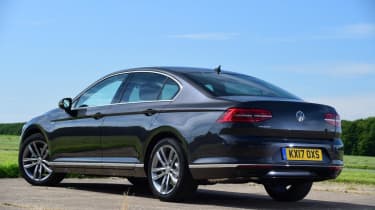 The Mk8 Passat hit UK roads in January 2015, priced from £22,215. Buyers could choose a saloon or Estate, but only diesel engines were offered initially, in 1.6 or 2.0-litre forms. The former was available in ultra-frugal BlueMotion guise from June 2015, rated at just 95g/km of CO2. A month later, the chunky four-wheel-drive Alltrack Estate reached showrooms.

In October 2015, a GTE arrived in saloon and Estate forms. This was powered by a petrol/electric plug-in hybrid powertrain with a 1.4 TSI petrol engine at its heart and a claimed 31-mile electric-only range.

More than half (57%) of the Passats sold in the UK are Estates, so you’ll have plenty of choice if you’re looking for a load-lugging family car. Most are diesels and, while the 1.6 TDI is fine if you’re in no hurry, the 2.0 TDI is usefully more muscular. 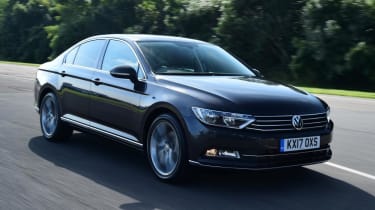 Alternatives to the Volkswagen Passat

With its semi-premium status, the Passat is up against a wide array of talented rivals, perhaps the closest of which are the Volvo S60 and V60. Similarly priced, ultra-safe and well equipped, the Volvo is a slightly left-field choice but still worth a closer look. Other obvious rivals include the Audi A4, BMW 3 Series and Mercedes C-Class, all of which come in saloon and estate forms with excellent petrol and diesel engines.

The Mazda 6 is another tough adversary, thanks to its smart styling, excellent dynamics and appealing interior, along with decent equipment and superb build quality at reasonable prices. The Ford Mondeo, Hyundai i40, Skoda Octavia/Superb and Vauxhall Insignia are also hard to beat. All offer hatchback or estate practicality with lashings of equipment and at keen prices.

Most Passats come with a steel space-saver spare wheel, but the GT-specification car is fitted with a full-size alloy spare.

You can’t put the wrong fuel in your Passat; a misfuel prevention device is fitted to every oneof the cars, regardless of trim level.

Volkswagen upgraded the Passat in January 2018, with all cars in the range benefitting from an extra helping of standard equipment.

Rattling sounds from the back of the car can be down to a loose undertray – that or the suspension needs to be lubricated. 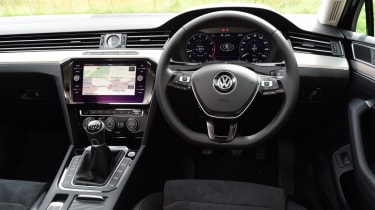 VW interiors are designed for ease of use rather than creative flair, and the Passat is no different. There are first-rate materials throughout, plenty of standard equipment and lots of head and legroom for rear-seat passengers. Boot space is good, too, at 586 litres for the saloon, and SE cars and above get a load-through facility. The Estate can stow 650 or 1,780 litres (seats up/down).

The Mk8 Passat has had 13 recalls. Early cars could be affected by braking problems because of wiring glitches, and airbags going off. Issues with panoramic sunroofs on Estates and faulty child locks led to actions in 2016. Recalls were also made for the ESP and lighting, airbags, seatbelt pretensioners, back seats, sunroof joints, wheel bearing housings and head restraints. 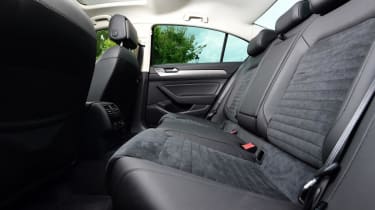 The Passat Mk8 wasn’t in our last Driver Power used-car survey, but it notched up a 54th-place finish in the 2019 new car poll. That’s a respectable result rather than a spectacular one, with owners liking boot space, all-round visibility and ride quality. The infotainment system also gets a thumbs up, but owners aren’t so keen on refinement, the gearchange or running costs.

For years the Passat has been a staple part of VW’s line-up, and in the UK it’s the brand’s third most popular model after the Golf and Polo hatchbacks.

The Passat isn’t a car that you buy with your heart, but it makes sense on so many levels that it’s hard to ignore. Spacious, practical, frugal, well equipped and easy to live with, it’s also good to drive and has reasonably strong resale values.

It won’t make your heart beat faster but, if you’re looking for safe and comfortable family transport, then look no further.