Do the sums add up for the plug-in hybrid Volkswagen Passat GTE on British roads? 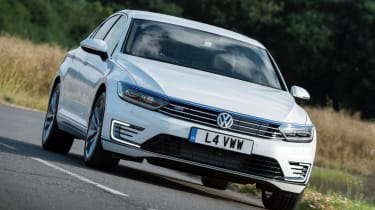 The Passat GTE offers a largely impressive blend of performance, refinement and efficiency. It allows you to enjoy the smoothness of electric power around town without the associated range anxiety, while also offering the long-distance performance of a normal petrol car. It’s smoother than a diesel model, but it doesn’t quite live up to the implied sportiness of the GTE badge. You’ll also need to make sure your volume of journeys justify the price hike over the conventionally powered car, though, as the real-world economy bonus isn’t always that great.

The diesel engine isn’t dead yet, but Volkswagen isn’t taking any chances. The manufacturer has begun its rapid expansion into alternative forms of propulsion – and the Passat GTE is the newest addition to the electrified fleet.

While it’s some way from the long-range pure EVs that VW has in the works, the Passat GTE, as with its smaller Golf GTE cousin, offers a halfway house between a full EV and a conventional combustion engine by providing both. Here, it’s a combination of a 154bhp 1.4 TSI petrol engine and a 114bhp electric motor, giving a total system output of 215bhp.

At first glance, only keen petrolheads would spot that this wasn’t a normal Passat. It looks much the same as a GT model, apart from a subtle blue line above the grille and blue-tinted GTE badging. The charging flap is hidden in the grille, although it’s flimsier than you’d expect from a VW. 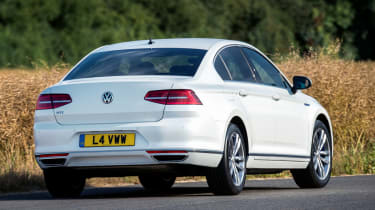 Horseshoe-shaped LED running lights in the bumper give the game away, however, while it’s similarly discreet inside. In fact, only the blue ambient lighting strips and the power distribution readouts remind you this is a hybrid. That’s a good thing; the Passat is a smart-looking car and, in typical VW fashion, fit and finish are on par with interiors from BMW and Jaguar.

The Passat GTE is all about choice, and there are plenty of ways to configure your driving experience. You can simply ignore the plug-in element altogether; the default Hybrid mode will balance the two power sources until the battery runs dry.

Or select E-mode and you’ll glide smoothly on electric power for as many as 31 miles at up to 81mph, while Recharge tops up the batteries at the expense of fuel economy.

Left to its own devices, the Passat GTE will do a bit of all three, and despite the odd lurch the powertrain slips between each mode pretty seamlessly.

An additional button by the gearlever shows VW’s intent to make this Passat a performance-orientated hybrid. Marked GTE, it primes both motors for full output, while at the same time weighting up the steering, improving throttle response and (optionally) stiffening the dampers. In that mode it will do 0-62mph in 7.6 seconds, thanks to the electric motor’s instant punch.

The VW still doesn’t feel particularly sporting out of town, though, where a top-spec diesel Passat is just as quick. Take it out of GTE mode and it’s still brisk, but if you’re not gentle with the throttle it will hold on to lower gears too long and start feeling like a CVT when, actually, it’s a six-speed dual-clutch box. Still, at least you can take manual control, while you can also increase the amount of regenerative braking with the paddles in electric mode. 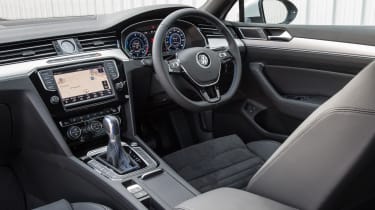 Over our 180-mile test of the Passat GTE, which included a mix of motorways, country roads and city streets, the trip showed an average of 53mpg – that’s with two three-hour charges on a household plug. That’s far better than a similarly powered petrol car, and on par with the 2.0 TDI 190 diesel. It’ll increase if you stay in EV mode in town, but as is the way with plug-ins, it’s way off the claimed 166mpg. Still, 39g/km of CO2 is a big draw for company car buyers, and the GTE is London Congestion Charge exempt.

There are some sacrifices to be made, though. The Passat weighs 110kg more than the diesel auto, which means it feels less agile, with a bit more body movement in bends. The bigger issue, however, is the ride. It’s mainly firm but controlled, and smooth on the motorway, but the GTE can occasionally crash and thud as it struggles to deal with sharp bumps in town.

You lose 180 litres of underfloor boot storage thanks to the battery pack, too. Furthermore, even with the Government grant, the GTE is £4,000 pricier than a similarly fast and impressively frugal 2.0 TDI.