Volkswagen Golf GTE hybrid is no GTI, but the low emissions figure will be attractive for some 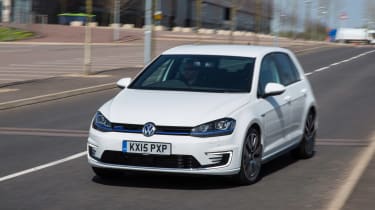 Think of the GTE as a fast and desirable hybrid and you won’t be disappointed, with rock-bottom running costs for those with the right driving habits. It’s no GTI when the going gets twisty, though, so if you want a better combination of low running costs and genuine hot hatch thrills, we’d recommend going for the cheaper Golf GTD.

If the idea of an all-electric VW Golf and the associated range anxiety fills you with fear, this new plug-in hybrid Golf GTE could be the perfect solution. Supposedly infused with DNA from the sporty GTI and GTD models, its party piece is claimed economy and emissions of 166mpg and 39g/km of CO2.

Propelled by a 148bhp 1.4-litre turbocharged petrol engine plus a 101bhp electric motor, it has a total output of 201bhp and a 0-62mph time of 7.6 seconds - three tenths faster than the GTD, and only 1.1 seconds slower than the GTI.

Its low emissions figure means it’s completely free to tax, and exempt from the London Congestion Charge. In fact, if your commute is less than 31 miles, you could (theoretically) never fill it with fuel. 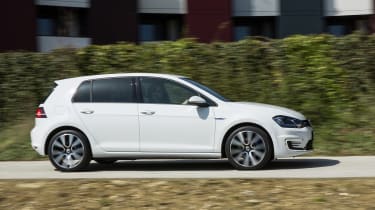 Realistically, that quoted all-electric range is probably closer to 20 miles, but on our test route it proved harder to drain than many conventional electric cars. It’ll charge in less than four hours from a normal domestic socket, or in just over two with a special wallbox.

There are five different drive modes: E-mode, Battery Save, Hybrid Auto, Battery Charge and GTE. While these are all fairly self-explanatory, Hybrid Auto offers the best compromise between performance and efficiency, with ‘GTE’ ensuring maximum performance when you want to push on.

It’s actually one of the best systems we’ve tried, and despite being essentially the same as an Audi A3 e-tron under the skin, it feels better sorted in the Golf. It‘s smooth and quiet around town, and – unlike the Audi – never lurches or jerks when the batteries run dry and the engine kicks in. 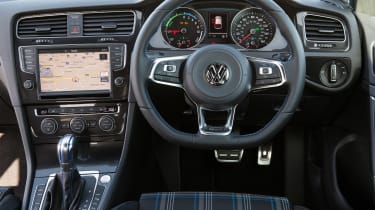 There’s no hiding the GTE’s weight, though. It feels much heavier than a GTI and It’s no where near as urgent as the GTD in gear. If you’re expecting hot hatch thrills, you’ll be disappointed by the way the GTE drives.

Kit is impressive though, and while the £33,085 list price is high, all models are subject to the Government's £5,000 grant for plug-in vehicles. Features include adaptive cruise, climate control and 5.8-inch media system, as well as 18-inch alloys, and a blue take on the GTI’s legendary tartan seats.

In our opinion, the GTE doesn’t quite warrant the ‘GT’ badge. To us, the hybrid Golf is better seen as a high-spec, super frugal alternative to the conventional 1.4 TSI – rather than a truly fast and fun hybrid.