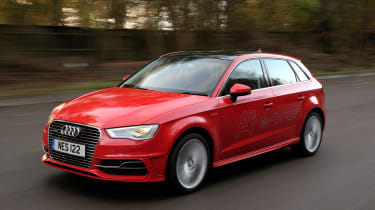 It’s very easy to be seduced by the e-tron’s upmarket badge, classy cabin and penny-pinching on-paper costs, as well as its punchy performance. However, the hybrid set-up feels less well resolved than rival range-extenders, while the batteries’ extra weight blunts the drive. Finally, if you use the car for long journeys, fuel economy suffers, too.

Audi is cashing in on the increasing-popular plug-in hybrid market with the Audi A3 e-tron. Paring its top selling model with today’s most fashionable powertrain, Audi looks to be on to a winner. The A3 e-tron, which will be the first of many plug-in hybrids from the German brand, has finally arrived in the UK.

Subtlety is the watchword with the e-tron, because it’s virtually indistinguishable from a standard Sportback. Eagle-eyed enthusiasts will spot the e-tron badges, carefully reprofiled front bumper and LED headlamps, but the rest of the car is pure A3.

A 1.4-litre TFSI engine and electric motor combine to develop a Golf GTI-worrying 201bhp and 350Nm of torque. It’s enough to crack 0-62mph in 7.6 seconds but more importantly returns 176.6mpg and 37g/km of CO2, meaning no road tax and a low-as-it-gets 5 per cent BIK rating. Theoretically a 580-mile range is possible, with 31 miles at up to speeds of 80mph on electric power alone. 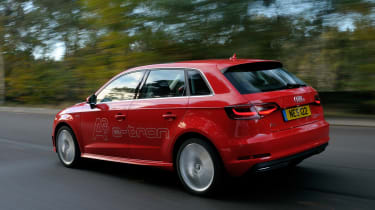 The electric motor is housed between the internal-combustion engine and six-speed twin-clutch box, letting it drive the car in battery mode alone, or assist the engine to boost performance. You can choose how the powerplant distributes its energy via the EV button on the dash, by toggling through four different driving modes: EV, Hybrid, Hold and Charge.

On a full charge, EV allows you to travel around 30 miles at speeds of up to 81mph in pure electric mode, while Hold saves battery power until you get to a city or village, where you might prefer to use the zero-emissions electric motor. Once the lithium-ion cells are drained, Charge mode uses the engine to top them up again – although this takes a heavy toll on efficiency, with economy dropping to well under 30mpg. The default setting is Hybrid, which aims to juggle the electric and petrol motors to make best use of the available energy.

However, in practice it’s not that simple. Up to 40mph the car tends to run in EV mode, but unless you’re extremely sensitive with the throttle the engine fires up even when there’s plenty of range left in the batteries. Worse still, the transition between electric and petrol running isn’t always smooth, and more often than not there’s an uncomfortable pause in the power delivery as the gearbox and various motors sort themselves out. 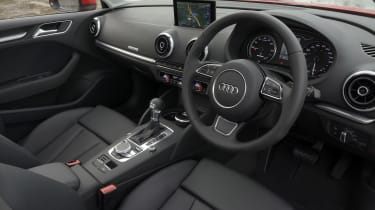 Still, there are few complaints about performance. With a combined output of 201bhp the Audi comfortably shrugs off its hefty 1,540kg to sprint from 0-60mph in a sprightly 7.6 seconds.

Being an A3, the e-tron has inherited rather vague and numb steering, while the added weight can cause it to become a little flustered over broken tarmac. But on the whole composure and comfort are where the e-tron excels. Only when you boot the throttle does the presence of the 1.4-litre engine become apparent, the majority of the time it silently whispers along.

Climb inside and like any Audi cabin its familiar but perfectly crafted. The design is clean, with every surface wrapped in brushed aluminium or soft leather. The e-tron also cherry picks some of the best bits from the options list, too. Dual-zone climate control, front sports seats, S tronic gearbox, Audi’s MMI navigation plus and a seven-inch colour display all come as standard. A smart power meter also replaces the conventional rev counter. 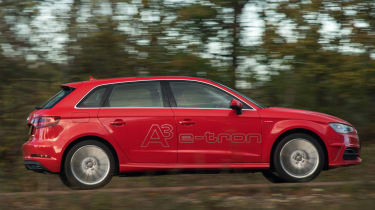 Given that the e-tron is based on a standard A3 Sportback, it’s no surprise to find the cabin is reasonably spacious and comfortable. There’s plenty of rear head and legroom, plus it's a full five-seater. However, there are some compromises.

For starters, packaging the batteries under the boot floor means load capacity has shrunk by nearly 100 litres to a supermini-sized 280 litres. Worse still, there’s no storage for the charging leads, so they live in a padded bag that clips on to the side of the load bay.

It needs only four hours for a full charge from a domestic supply, or two-and-a-half hours if you have a special wall-mounted fast charger installed.