Audi's hybrid A3 e-tron has been facelifted, but can it compete with its ever more sophisticated rivals? 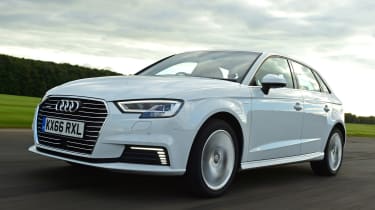 The A3 e-tron’s visual improvements bring it in line with the rest of the range. However, with no changes to the powertrain, the hybrid Audi isn’t quite as sophisticated as recently updated rivals like the BMW i3. As it only has a 29-mile all-electric range it's not as convenient as a more dedicated model like the i3 either, and it is quite expensive.

Just as the regular Audi A3 was treated to some mid-life surgery earlier this year, the German brand’s most eco-focused model – the A3 Sportback e-tron – has also undergone a round of revisions.

It means the e-tron features the same facelifted nose and other styling tweaks, including a new taillight design. However, underneath it’s mechanically identical to its predecessor – except for one significant change that we’ll come to later.

This means it still uses Audi’s 148bhp 1.4-litre TFSI petrol turbo engine in conjunction with a 101bhp electric motor to give a combined system output of 201bhp and a healthy 350Nm of torque. 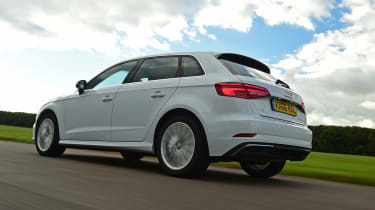 This is a fair chunk of power in a relatively compact family hatchback, so the e-tron sprints from 0-62mph in 7.6 seconds. However, the extra mass of the 8.8kWh battery pack means the Audi weighs 1,540kg in total, which means the performance isn’t what the power and torque figures suggest.

Getting all that mass off the line takes its toll on the powertrain, but once the A3 is rolling it feels energetic up to around 40mph. It’ll manage 81mph on electric power alone, but beyond about 40mph the electric motor’s effect isn’t as noticeable, which means the petrol engine cuts in if you ask for a burst of anything more than gentle acceleration.

It’s a smooth unit and the six-speed S tronic DSG automatic gearbox swaps ratios without fuss in the most part. However, when you deplete the battery’s energy the transmission struggles with the transition between the petrol and electric drive modes. The gearbox sometimes clunks or doesn’t shift slickly enough. 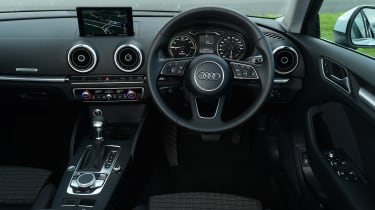 And it’s here where the only major change comes in. In the previous A3 e-tron there was a battery charge mode that enabled the car to use its petrol engine as a generator to top up the battery.

In this facelifted model Audi has done away with this function as the TFSI unit was exposed to greater loads and therefore fuel consumption increased, which defeated the point of the e-tron’s hybrid powertrain.

Instead, there’s a full EV mode for when the battery charge allows, a hybrid mode that intelligently manages the mix of petrol and electric power, and a hybrid hold mode, which conserves battery power to deploy in a low emissions area like a town or city.

However, without this setting for the drivetrain, once you’ve exhausted the e-tron’s claimed 29-mile electric range, it’s difficult to keep charge levels up, at which point the car becomes a regular A3 with a heavy battery pack on board.

Even with clever cylinder deactivation that shuts down two of the four-pot unit’s cylinders to improve economy, it pays to plug the A3 in to maximise efficiency.

If you do, the battery pack takes around two hours 15 minutes to charge using a faster wall box charger, or approximately three hours from a standard three-pin plug. With a full charge, Audi claims 166.2mpg and 38g/km CO2 for the car, which means a lowest possible BiK rating of seven per cent that’ll benefit company car buyers. 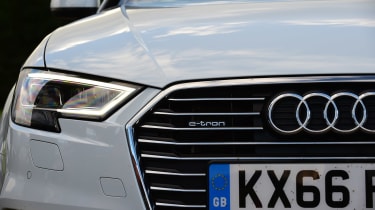 The equipment spec is similar, too. The e-tron gets a seven-inch colour infotainment system with sat-nav, DAB and Bluetooth, while sports seats, LED headlights, autonomous braking with pedestrian detection, cruise control and parking sensors all come as standard.

The 280-litre boot is 100 litres down on the regular five-door A3 due to the battery pack located in the back, while this also has an impact on the handling. The suspension setup is firm, but it tackles typically roughed-up British roads well enough, with the quick, pointy steering and solid body control offering plenty of composure and safety. 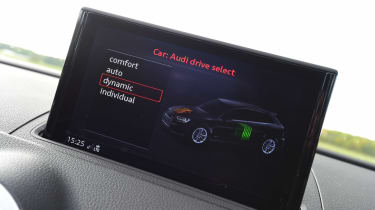 You can still feel the extra weight at higher speeds though, while on larger wheels the chassis thumps over cat’s eyes and other lumps in the road, but the dampers do their best to chamfer off any harshness.

Driving fast defeats the point of the e-tron. But even when cruising, it’s not the most effective hybrid, as a BMW i3 Range Extender offers more electric range, is smoother to drive, more refined and efficient, and costs less.