We try the Volkswagen Passat with the brand’s latest 1.4 TSI petrol engine to see if it’s a worthy diesel alternative 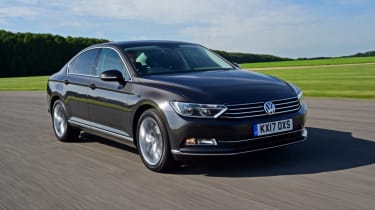 The petrol version of the VW Passat still isn’t the most cost-effective option for company car choosers, but should have real appeal for everyone else. It’s comfortable, refined and impressively efficient in the real world. And while it isn’t the most involving big saloon to drive, it delivers jaw-dropping amounts of all-round competency. If you’re after this engine, we’d look for a cheaper trim level, though.

Petrol family saloons have been out of favour for more than a decade, thanks to taxation and company car rules designed to favour diesel models. But recent events have forced a rethink and have made products such as the latest petrol-powered Volkswagen Passat more relevant again.

This isn’t just a regular turbo petrol engine, either. The 148bhp 1.4-litre unit has VW’s cylinder-deactivation technology, so it shuts down two cylinders when you’re cruising along on part throttle, in a bid to improve fuel efficiency. On paper it works, too, with CO2 emissions of 116g/km and claimed economy of 56.5mpg. 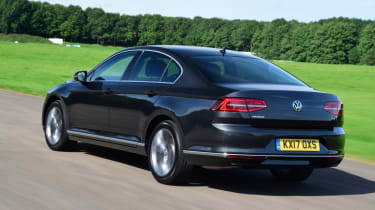 The set-up is effective on the road. The engine has 250Nm of torque from as little as 1,500rpm, so you can almost drive it like a diesel, with early upshifts. It’s smooth throughout and while you may hear a slight resonance when the cylinders shut down, for the most part you’ll only become aware of it kicking in when the instrument panel indicator lights up.

Real-world economy appears strong, too; we saw just under 50mpg on a mixed commute that combined a motorway run and traffic-clogged urban streets.

The overall chassis set-up is for comfort, and the Passat does a good job of soaking up road imperfections. There’s a bit of body roll as a result, however, and when coupled with accurate-but-inert steering, this makes the car a relatively uninvolving drive on twistier roads. It’s never unruly, though. 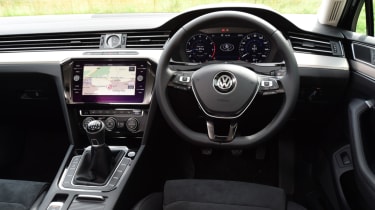 you get the fully digital instrument panel as standard, along with heated ‘premium comfort’ front seats, a panoramic sunroof and an upgrade to 18-inch wheels. We’re not sure the extra kit is worth the additional financial outlay – and since the 150 ACT engine is also available in SE Business, we’d be tempted to stick with that version.