Latest eco Volkswagen Passat BlueMotion promises 76mpg, but does it demand any compromises? 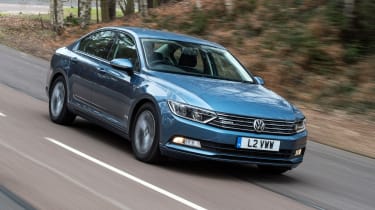 Company car drivers will flock to the Passat BlueMotion, and for good reason. It’s extremely efficient, doesn’t demand any performance compromise and looks just as smart as the standard car. For some, the £880 premium this super-efficient model commands will be better spent upgrading the regular car to SE spec. The Passat BlueMotion is a great family car, but the Skoda Superb is bigger, better value and almost as good to drive.

Volkswagen may be promising a raft of fancy new hybrid and electric models in the future, but diesels remain big business despite the recent Dieselgate scandal. The brand offers petrol versions of the fuel-sipping Polo and Golf, yet the Passat BlueMotion is diesel-only – and we’ve driven it in the UK for the first time.

• Best company cars on the market

While you’ll see BlueMotion badges on many of VW’s diesels – signifying the use of high-efficiency tech – this model has the full range of eco tweaks. From the outside, you’ll spot a blanked-off front grille and revised rear bumper, as well as a more aerodynamic 17-inch alloy wheel design. The car rides 15mm lower on sports suspension to reduce drag, while shutters in front of the radiator direct air around the nose. 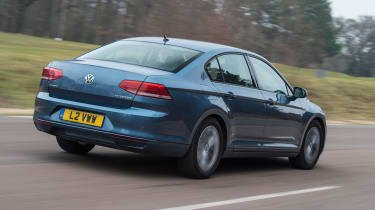 The effect on the exterior design is subtle, so the Passat is still a classy-looking family saloon. But the impact on efficiency is far greater, with VW claiming an economy jump from 70.6mpg on the regular 1.6-litre TDI to 76.3mpg on this model. CO2 emissions fall from 105g/km to 95g/km, too. That’s a big improvement, but it’s worth remembering the BlueMotion costs £880 more to buy than the S version on which it’s based.

Company car buyers do profit, however, as the Benefit in Kind tax rate falls from 19 to 17 per cent and road tax is free as a result. It’s just a shame that the Passat can’t quite pip the Ford Mondeo 1.6 TDCi ECOnetic’s figures of 78.5mpg and 94g/km. Still, after a mixture of town and motorway driving, we were easily able to nudge 60mpg on our test.

Fortunately, there’s no evidence of the Passat’s efficiency drive inside. It’s as solid and upmarket as ever, with classy chrome trim and quality to match cars from the class above. The layout is sensible yet stylish, with easy-to-use buttons and an intuitive touchscreen. It’s a shame the 6.5-inch display’s graphics are a little basic, while sat-nav is part of a £675 option pack that brings VW’s ‘Guide and Inform’ online traffic and news service. 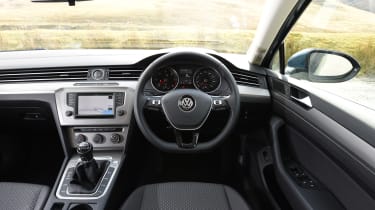 An eight-inch touchscreen is also on the options list, which looks more in keeping with the Passat’s premium feel. Space is excellent, though, with plenty of head and legroom for four adults and a well shaped 586-litre boot. The Skoda Superb is roomier still, however, and given it’s cheaper to buy, it could be a better choice for some.

Buyers will be happy to learn that there’s no performance penalty in opting for the BlueMotion model. In fact, the top speed increases by 1mph to 130mph thanks to the better high-speed aero. The 118bhp 1.6 TDI is reasonably flexible, and is happy being revved to get the best out of it. Even so, despite the slick six-speed manual shift, it isn’t the quietest unit when stretched, and can sound strained. Keen drivers will lust after the more urgent 2.0 TDI. That engine also claims a respectable 68.9mpg.

The BlueMotion retains the regular car’s unflustered composure in corners, aided by the sports suspension, which reduces body roll. It’s not particularly fun, although it feels more agile than the Mondeo. Wind and road noise are kept to a minimum, but the 1.6-litre diesel’s note is more noticeable. 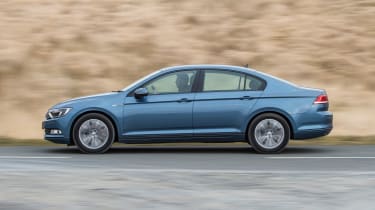 However, the VW’s suspension is affected by the BlueMotion tweaks, and while it’s far from uncomfortable and less of a problem the faster you go, it takes on a slightly firmer edge around town – picking out bumps and potholes in the road.

The Passat is designed to spend most of its life pounding motorways rather than crawling through town centres, but it’s the only real compromise BlueMotion spec demands over the standard model.