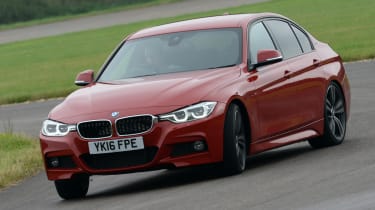 If you’re a company car driver who does plenty of short hop journeys and can recharge the batteries every day, then the BMW 330e's well integrated hybrid powerplant, strong performance and cost savings easily offset its slightly blunted handling.

With its bold i3 hatchback and i8 supercar, BMW has been at the cutting edge of electric car engineering for a number of years. It’s clear buyers have been convinced by these daring and alternative energy machines, as battery-powered models now make up four per cent of the brand’s European sales.

So it comes as no surprise to find BMW has squeezed some of its pioneering plug-in powerplants under the skin of more mainstream models – and the first car in the UK to benefit from an eco-friendly mechanical makeover is the 3 Series.

The new 330e combines a 2.0-litre turbocharged four-cylinder engine and electric motor to deliver some truly eye-catching figures. For example, the petrol/electric powerplant serves up 249bhp and 420Nm of torque, yet depending on wheel size emits as little as 44g/km and claims up to 148.7mpg. More importantly, with a full charge in its batteries, the BMW will travel around 25 miles in zero emissions electric mode before needing assistance from the internal combustion unit.

Yet perhaps the most remarkable aspect of the 330e is how unexceptional it seems, especially alongside the brand’s daring ‘i’-badged machines. In fact, our Melbourne Red M Sport test car could easily be mistaken for a run-of-the-mill 320d diesel. The only clues to its green status are subtle eDrive badges on the C-pillars and an extra filler flap in the front wing for charging. 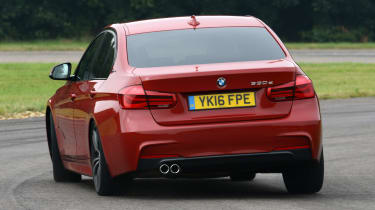 It’s a similar story inside, where the 330e is virtually indistinguishable from standard models. Look closely, however, and you’ll spot the eDrive button behind the gearlever, while ahead of the driver there’s a small power gauge just below the rev counter.

There’s another green giveaway in the boot, which has been reduced in size from 480 to 370 litres to make way for the lithium-ion cells. Featuring a maximum capacity of 7.6kWh, the battery pack can be fully recharged in just over two hours using a BMW i Wallbox, while using a traditional three-pin plug increases this to three hours. Once charged you can leave the car to decide when to use the EV energy, select electric only mode or instruct the system to save the charge until later.

Prod the BMW’s starter button and the dash displays spring into life, but there’s no sound from under the bonnet. Squeeze the throttle and the 330e accelerates swiftly and silently. The 87bhp electric motor is mounted on the back of the 2.0-litre engine and drives the rear wheels through an eight-speed box. 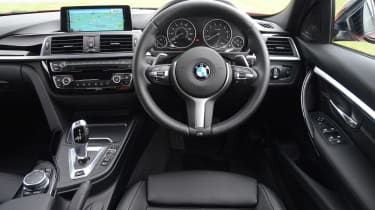 With a full charge the 330e can travel on electric power for around 25 miles and at speeds of up to 50mph. Go further or faster and the turbocharged petrol engine joins in seamlessly to provide assistance. Even when the battery is depleted the system makes sure there’s a minimum amount of charge available, so you can always access the 330e’s considerable performance potential.

At low speed the electric motor assists the engine to deliver effortless, big-chested performance that feels nearly as muscular as the brand’s brawny six-cylinder diesel units. The thrust tails off as the revs rise and the acceleration becomes purely petrol, but the 3 Series is still good for 0-62mph in a claimed 6.1 seconds.

This performance is even more impressive when you consider that the 330e tips the scales at a portly 1,735kg – a hefty 210kg heavier than the 320i auto it’s based on. However, while the hybrid model does a good job of disguising its mass in a straight line, it’s less successful in corners. 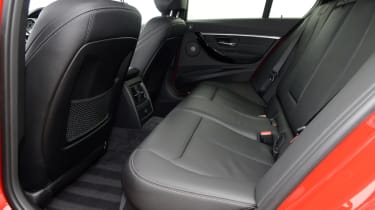 The rear-drive 3 Series’ natural balance, poise and feedback are all present, but the 330e turns in a bit more lazily and there’s more understeer than in the conventional models. Bumpy roads also highlight the slightly more wayward body control – although the BMW rides smoothly at everyday speeds.