When you are keen to make the jump from little known budget brand to class pacesetter, every new car has to hit the bullseye. And that's exactly why the Kia Rio needs to be so good. The company is working hard to make the big time, but faces some major challenges. 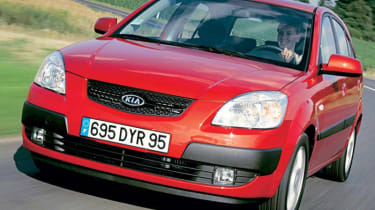 The Rio is an attractive addition to the supermini class, with the well equip- ped diesel LX set to be the pick of the range. It is more refined and powerful than the petrol and likely to cost only £500 more. Suspension issues aside, the car is practical and refined, and offers low running costs and good value for money. It seems sure to be a hit.

When you are keen to make the jump from little known budget brand to class pacesetter, every new car has to hit the bullseye.

And that's exactly why the Kia Rio needs to be so good. The company is working hard to make the big time, but faces some major challenges. Not only was the old Rio its all-time best-seller, but expectation of the Korean marque has been raised thanks to the excellent Picanto city car. We took the wheel of the first new European-spec Rio to see if it can repeat the success.

Happily, first impressions are good. The pronounced wheelarches give it a solid look while the large headlamps seem more European in appearance than Far Eastern. Chunky alloy wheels and purposeful front bumpers provide real road presence, while a quick tour of the rear proves the Rio is practical, too, thanks to its hatchback and easy-to-load luggage area.

There is more good news inside, as the cabin is well laid out and has an upmarket look, thanks to neat instrumentation and switchgear.

However, the materials used on the dashboard and seats cannot match the class leaders, and there is too much in the way of hard plastics - although everything feels solidly put together. As you would expect from a company which has built a strong reputation on value for money, there is also bags of equipment on offer.

Specification of UK cars is not yet confirmed, but buyers can expect air-conditioning as standard on the entry-level GS, plus six airbags on the top-of-the-range LX. And despite the fact the new car is shorter than its predecessor, there is plenty of space, which is down to a longer wheelbase.

There will be two engine options when the Rio arrives at the beginning of October, with prices from just under £8,000. The 1.4-litre petrol model driven here has plenty of power and is linked to a choice of automatic and manual gearboxes. That said, the 110bhp 1.5-litre diesel is far better. It is a powerful, Euro IV-compliant version of the unit used in the Cerato family hatchback, and offers impressive pace and decent motorway refinement and economy.

Unfortunately, the driving experience does not match the promise of the engines, and this is where the Kia falls down. Our cars suffered from excessive body roll and the soft suspension resulted in bouncy progress on the uneven surfaces of our French test route.

Kia is promising UK versions will have reworked spring and damper settings which should address these failings - but we will have to wait to test the Rio on our roads before delivering a final verdict. At this stage, though, it seems safe to say that while 'The Power To Surprise' is the firm's current slogan, a bad new Kia would be more of a shock.