We're first behind the wheel of Kia's new Rio, can it trouble the class-leaders? 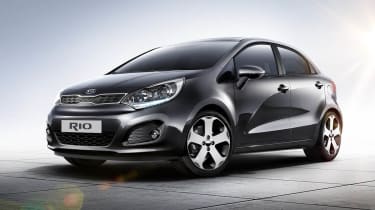 The new Rio is a vast improvement over the old car. Not only is it one of the most stylish models on the road but it also now has the kind of drive and build quality to match up to the class-leaders. If the price is right – and we’ve been told it will be – and Kia continue to throw in generous kit as standard then the Rio could really shake up the supermini segment later this year.

Some manufacturers hit upon a winning formula and stick to it, but not Kia. Despite the current Rio selling almost 900,000 units worldwide, the Korean firm has given the Rio a complete and thorough re-working to bring it in line with the rest of its range.
Place the two cars side-by-side and you’d struggle to tell they were related. Oversized headlights with LED daytime running lights, a narrow ‘bow-tie’ grille and carved flanks mark out the new model, giving it the premium feel associated with modern Kias.
Inside, the cabin is a much more pleasant place to be too. This car is 20mm longer than the old Rio and has had its wheelbase extended by 70mm resulting in an increase in space for all passengers. Four tall adults can sit comfortably for long journeys.
Boot space has also risen to 288 litres– a 7% improvement over the old Rio.
Solid build quality has become a Kia trademark, and the newcomer feels no different. The stylish interior is well screwed together and the quality of materials is good for this class.
Our test car was powered by Kia’s new three-cylinder diesel which produces 69bhp. The big news is its low 85g/km CO2 emissions figure (when fitted with stop/start), which makes it the cleanest combustion engine car on the road today.
Considering the sluggish 0-62mph time of 16.4 seconds, the Rio didn’t feel particularly slow and that’s partly down to its 162Nm torque figure. Our only worry would be overtaking at motorway speeds.
Most impressive of all though is how refined the unit is. Below about 3000rpm there’s only a faint hum from underneath the bonnet. Push it too hard though and there’s a harsh rattle.
In the bends, the Rio feels nimble thanks to its light but responsive steering and well-controlled body roll. Re-worked rear suspension has helped cure the Rio of the understeer that plagued the old model too.
The overall result is a ride slightly stiffer than current Rio drivers will be used to but it still manages to take the edge off harsh bumps in the road.
With the new Rio, Kia’s hatchback has gone from budget option to genuine class contender and – with a price of around £10,000 when it goes on sale in September – it's good value too.
Share this on TwitterShare this on FacebookEmail