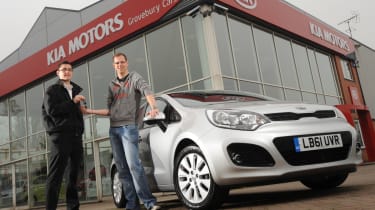 8
Nothing beats the excitement of climbing behind the wheel of a shiny new car. The promise of gleaming paintwork and that distinctive smell of a factory-fresh cabin make picking up a new set of wheels a real pleasure.
So I was looking forward to visiting my local Kia dealer – Grovebury Cars in Dunstable, Herts – where I was going to be handed the keys to the latest addition to the Auto Express fleet: a Rio 1.1 CRDi.
The supermini is one of our favourite cars in this class, thanks to its blend of style, value and space. But would it still be one of our top picks after 12 months’ hard use?
To find out, we’ve got our hands on a desirable five-door model in 2 trim, which has big car features like air-con and smart 16-inch alloy wheels. As it’s very well equipped as standard, the sole optional extra we’ve added is Bright Silver metallic paint, at a cost of £425. Our only other outlay on the car is the great-value service pack, which gives three check-ups for a bargain £269.

Before I took to the road, salesman Kieran Ratcliffe talked me through the interior. He showed me how to pair my iPhone with the car’s stereo using the Bluetooth hands-free and highlighted the neat iPod connection.
Kieran also took the time to point out the fuel filler cap release next to the driver’s seat, as well as the useful arrow on the gauge that indicates which side of the pump to pull up next to. Not that I’m likely to be spending much time on filling station forecourts if the car delivers on Kia’s claimed 74.3mpg economy figure.
Yet despite its eco-friendly tuning, the 1.1-litre CRDi engine is a surprisingly smooth and eager performer on the road. And while you occasionally need to change down gears to maintain progress up steep hills, the standard six-speed box has a precise action and is great for relaxed motorway cruising.
There’s a fly in the ointment, though, as my initial calculations have revealed that the Rio has so far managed a disappointing 36.3mpg – less than half Kia’s official claim. I’m hoping this figure improves as the miles increase and the diesel begins to loosen up a little.
Elsewhere, the Kia has impressed. The cabin is spacious, while the rear seats fold flat to increase the carrying capacity from 288 litres to a healthy 923 litres – very useful when I needed to transport all the bicycle racks in a test to a photo studio recently.
There are loads of storage cubbyholes, too. I particularly appreciate having a massive glovebox to stow sat-navs and cleaning kit, while the addition of a central armrest helps me get comfortable on long journeys. Also useful are the steering wheel controls for the stereo and hands-free functions, while the robustly built dashboard has a classy look and feel.
On top of that, the Rio feels nimble on the road, while the light controls and decent visibility make it a perfect choice for the crowded city streets of my daily commute. Only the firm ride gives cause for concern.
So it’s a promising start for the stylish, spacious and well equipped Kia. If the fuel consumption starts to improve, I can see its showroom shine lasting for a long time.

“I came away from a brief stint in the Kia pleasantly surprised. It handles neatly and has sharp styling and a decent-quality cabin. If only the ride wasn’t so firm.”Jack Rix, Deputy news editor

“Impressed by 1.4 petrol Rio on test drive. Decent handling and performance, and loved the quiet and comfortable interior – so superior to most rivals in this class.”YoungAtHeart, via www.autoexpress.co.uk