Our long-term Kia Rio is half the price of an Aston Martin bike, but it makes twice as much sense 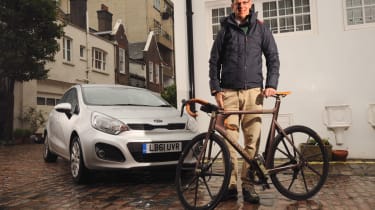 Cycling is all the rage in 2012, with Bradley Wiggins winning the Tour de France and Team GB enjoying Olympic glory. But you’d have to be pretty keen to splash £25,000 on the Aston Martin One-77 Cycle – it’s nearly twice as pricey as our Kia Rio.

This ultimate pedal-powered two-wheeler is named after Aston’s $1million supercar, and is just as exclusive, with only 77 being built. For the money, you get bright lights and trip computers with speed and temperature info, but our supermini has all this, as well as protection from the elements. And although it shares the bike’s overly firm ride, I’d choose the Rio every time.

Our ‘2’-spec model has Bluetooth phone functionality, plus an iPod connection and air-con. On top of that, the low CO2 emissions of its 1.1-litre engine meant I didn’t have to pay the £10 daily Congestion Charge for driving to our central London office, while road tax was free, too. However, I needed these savings to offset the disappointing fuel consumption.

In an effort to boost the car’s economy I regularly checked that the tyres were running the right pressure. As a result, I recently noticed the front tread depth was getting close to the legal limit, which was a lot of wear for the mileage.

Worn tyres didn’t do much to help our car’s uncomfortable ride, either, and the 17-inch alloys sent lots of vibrations and jolts into the cabin. The firm suspension was always a personal bugbear during my six months with the car, and it spoiled the Rio’s otherwise calm, comfortable – and very practical – cabin.

The boot is huge, and with the rear seats folded flat there’s a generous 923 litres of space. Better still, the wide opening lets you make the most of the room – which meant the Kia swallowed nearly all the products I was testing (including the Aston bike). And even with the rear bench in place, there was plenty of boot space for my dog to move around in.

I had no complaints about reliability, either, which fully justifies Kia’s decision to back the car with its industry-leading seven-year warranty. In my time with the Rio, nothing broke or fell off, and it never left me stranded at the roadside. In fact, the only time I lifted the bonnet was to replenish the washer fluid bottle and top up the oil, which was down to the minimum mark.

Overall, the Kia proved itself as a worthy rival to mainstream superminis. It’s a handsome, generously equipped and spacious runaround that’s backed up by a brilliant warranty. Only the firm ride and disappointing fuel economy stop it scoring top marks with us – and I’d rather put up with these flaws than get on my bike.

“The Kia is up there with the class leaders. It’s well equipped, stylish, spacious and solid. All it needs is a smoother ride and more sparkling dynamics.”Lesley Harris, Road tester

“You’ve been getting shocking mpg for a 1.1-litre diesel. My one-and-half-tonne diesel estate is twice as powerful as the Kia, yet averages 51mpg.”Daniel, via www.autoexpress.co.uk