New version of Korean SUV is a more refined prospect. 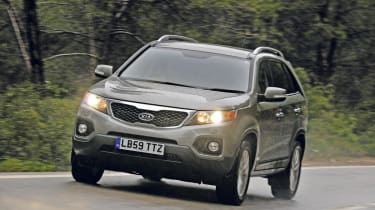 it’s hard to see where the Sorento hasn’t improved. The newcomer has space for seven, plus handsome proportions and a punchy but frugal new diesel engine. And while Kia admits it’s traded some off-road ability for on-road refinement, it’s a shrewd move, opening the car up to a wider audience. It doesn’t have the ability to tackle the rough stuff, or have the premium feel of a Land Rover Discovery, yet costs nearly half as much. It’s a tempting choice.

It's all change for Kia’s rugged 4x4 flagship. The seven-seat Sorento SUV has received a complete overhaul – switching its focus from off-road ability to on-road refinement. But has it gone soft in the process?

The styling has certainly ‘matured’, with tidy proportions and Kia’s fresh family face providing a distinctive new look. The old ladder-frame chassis and locking differentials have been ditched, too.

In come lighter, more modern monocoque underpinnings – and as a result, the Sorento is a much better car, riding smoothly over bumps in the road. Body roll is an issue in tight bends, but there’s plenty of grip, and it feels more surefooted than before.

Our car was fitted with the new six-speed auto gearbox – which works well with the punchy 2.2-litre diesel. It offers 197bhp and 422Nm of torque, and returns 43.5mpg (in two-wheel-drive, manual guise), easily outperforming the old 2.5-litre unit.

Inside, the Sorento feels equally well judged. Leather is standard on all but the base-spec models, as are seven seats on all diesels.

Our sole gripe is with the hard plastics, which feel out of sync with the rest of the package. An entry 2.4-litre petrol model, which is available only in base trim, with two-wheel drive and five seats, is also offered. But this will be a rare sight in the UK – especially given the pace and economy that are afforded by the new diesel.

Kia goes from strength to strength, and the Sorento is its most luxurious model to date. While its predecessor was a more rugged off-roader, this 4x4 is designed to deal with the worst weather conditions, not to cross deserts – and that will help broaden its appeal.