Chunky looks remain, but the new Kia Soul 2014 is bigger and more grown up 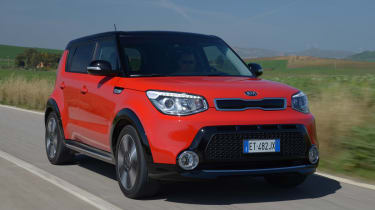 The new Kia Soul 2014 blends the solid build quality, generous standard kit and composed driving manners we’ve come to expect from Kia with bold styling and quirky detailing. It’ll be interesting to see if the new Soul captures the young buyers the first model struggled to attract in the UK. More comfortable, better to drive and smarter - the new car improves on its predecessor in every way and is a characterful addition to the Kia range. Some rivals are more practical, but the Soul is a likeable and distinctive choice.

The new Kia Soul 2014 arrives next month with the advertising slogan ‘totally transformed’. But at first glance you’d be excused if you missed it. However look closer and you’ll spot that, while it’s instantly recognisable as a Soul, the newcomer is completely new.

Bigger and more grown up than before, the new Soul shares a platform with the Cee'd hatch, but retains the curved A-Pillars, floating roof and boxy dimensions that raised eyebrows on the launch of the original in 2008. Overall length has increased by 20mm, it’s 15mm wider and 10mm lower - and it now looks more self confident in its funky SUV inspired body.

Full UK prices have yet to be announced but they’ll range from just over £12,000 to £20,000 across a choice of five trims – Start, Connect, Connect Plus, Mixx and Maxx. 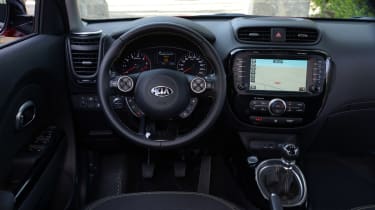 The last two get an Urban Styling Pack that adds to the bold looks with gloss black trim treatment on the bumpers, side skirts and wheelarches. Mixx models can be specified with a choice of four two-tone designs with coloured roofs, while the flagship Maxx gets a panoramic glass roof. Top spec models also get 18-inch wheels.

Inside, the cabin has taken a step upmarket with a redesigned dash, modern switchgear and deep-set TFT dials. As with all Kia’s latest models, the layout is straightforward, build quality is excellent and kit levels are generous. Top-spec models come with excellent touch-screen navigation and a high-end audio system, while piano black inserts brighten up the cabin even further.

There’s a wide range of wheel and seat movement, and with thinner A-Pillars, visibility is better than the old car. Thanks to the 20mm longer wheelbase there’s enough room in the back for adults to sit comfortably, but the middle seat is narrow and the rear seats don’t slide or do anything clever - there’s just a traditional 60/40 split/fold set up. On the plus side, boot volume has grown to 354 litres, the tailgate is wider and there’s a handy under floor storage area. 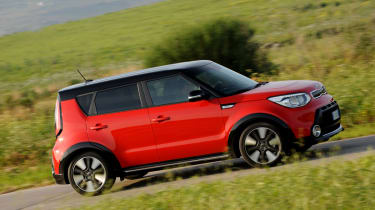 When it comes to the driving experience the Soul has the same well-enginered ease of driving and composed handling as the Cee'd. With a 29 per cent increase in torsional rigidity compared to the outgoing car and upgraded sub-frame bushings, it’s better to drive and more refined.

Kia’s Flex Steer system gives you a button on the wheel to switch between Sport, Normal and Sport steering modes, but while weighting increases a bit, there’s little real difference in feedback or feel. However, the Soul turns in positively enough, and in spite of the raised SUV stance, body control is decent. The six-speed manual gearbox has a light but pleasant shift action, and from Connect trim onwards there’s the choice of a six-speed auto, as well.

Offered with a 131bhp 1.6-litre petrol or 126bhp 1.6-litre diesel engine, the well-proven CRDi diesel tested is noisy at idle, but on the move, road and engine noise is well isolated from the cabin, especially if you keep the diesel in the mid-range, where performance is adequate enough to ensure the Soul feels relatively eager. 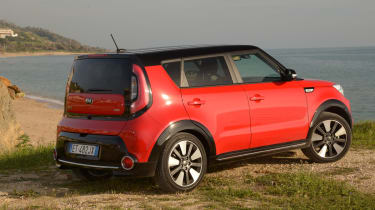 The old Soul had a disappointingly firm ride and the new car’s base set-up is more compliant, although the large 18-inch wheels thump into imperfections, upsetting the Kia’s composure somewhat. But in spite of a smooth stop/start system, perhaps the biggest disappointment is the relatively high 125g/km emissions, which rise to 158g/km if you choose the automatic.

However, the often over looked Soul has been bought bang up to date and is a now a far tougher rival for cars like the Nissan Juke and Renault Captur.