The new seven-seat Kia Telluride SUV offers much, but sadly it’s not coming to the UK 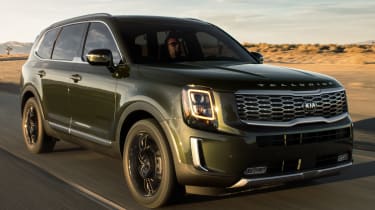 We're not about to start lobbying for Kia to bring the Telluride to the UK, but it does bode well for the next-generation Sorento and Sportage in terms of looks, quality and tech. It also reminds us how Kia is continually getting closer to premium brands on all those fronts, too, while remaining at – or close to – mainstream prices. We’re not surprised the Telluride has become such a hit for Kia in the US.

Just as the impressive Stinger GT tops Kia’s passenger car range, the Telluride is the brand’s biggest, most expensive SUV. But unlike the Stinger, the Telluride isn’t coming to the Britain – it’s size, price and 3.8-litre V6 engine aren’t especially UK-friendly, apparently.

But it’s not completely irrelevant. What the Telluride does for us here, is give us a good indication on the styling for future Kia SUVs (think next-generation Sorento and Sportage). It’s another reminder of how far the Korean brand has come in terms of quality and dynamics – as well as its ability to challenge premium brands at a fraction of the cost.

Let’s get that size issue out of the way first, though. At 5,001mm long, it’s just over 50mm longer than a Volvo XC90, yet 163mm shorter than a BMW X7. It’s narrower than both, though. That length gives you three rows of seats with two ‘captain’s chairs’ in the middle row and a three-seat bench right at the back. Legroom is good wherever you’re sitting and there’s still a decent boot. The back row of seats folds flat into the floor, as you’d expect.

It feels pretty big as you climb aboard, with a lofty and comfortable driving position and a good view out across all four corners. Yet the biggest surprise of all is how posh it feels – especially given the $44,585 (around £36,300) list price of our top-spec SX four-wheel drive model. While exchange rates aren’t always that representative, there’s no avoiding the fact it undercuts its rivals by tens of thousands of dollars. 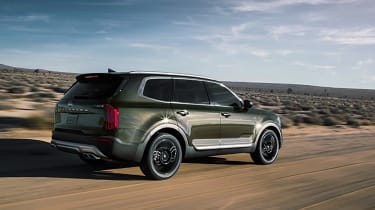 The interior is smartly trimmed, featuring a premium-looking dashboard fitted with classy wood inlays and just the right amount of brushed aluminium-style trim and decent quality plastics. There’s a 10.25-inch touchscreen with its own navigation system, or you can plug in your Android or Apple smartphone to use third party mapping. Wireless charging is also included, and there are six USB charging points.

Everything you touch looks and feels classy, and the on-board tech is as good as anything else you can find in this class. The head-up display is crystal clear, and the Blind Spot View Monitor offers a neat trick – showing a high-definition image of the Telluride’s blind spot in the instrument cluster when you activate the indicator.

There’s a host of other advanced assistance safety systems (we counted 17 before giving up), including Highway Driving Assist, climate control for all, and a decent ten-speaker audio system, which can simultaneously stream music from two phones via Bluetooth.

Dynamically, the Telluride does what an SUV needs to do. It’s not much fun to drive, nor is it meant to be. But it rides well and is quiet on the move – probably the most important attributes of a car such as this.

The steering isn’t especially precise and there’s a fair bit of body lean if the off-ramp on the freeway proves tighter than expected. And in spite of there being a 3.8-litre V6 under the bonnet, it doesn’t feel all that fast. Its 287bhp and 355Nm of torque will move you along sedately, while the eight-speed auto shifts smoothly even when you do ask for a (little) bit more power.