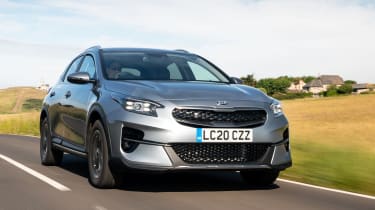 In many ways the XCeed PHEV is more sensible than the regular car; it looks better value against its rivals than other XCeeds. The electrified powertrain is efficient, even if the lumpy gearbox takes a little pleasure out of the drive. The small boot and cramped rear also disappoint, but we like the looks, the quality and the kit – and the potential savings on your running costs will be welcome, too.

When it comes to electric vehicles and SUVs, it seems everything Kia touches right now turns to gold. The big Telluride SUV is current World Car of the Year, no less, the Soul EV is another World Car winner, and the Niro has garnered a load of gongs, too. So surely things bode well for the new plug-in hybrid version of the XCeed?

First a quick recap, though. The XCeed is Kia’s family hatch with a light sprinkling of the brand’s SUV gold dust. With an internal-combustion engine, we liked the XCeed apart from its price. But at just over £30,000 with a 1.6-litre petrol and small electric motor for a combined 139bhp, this XCeed PHEV isn’t bad value compared with plug-in rivals. Thanks to its 32g/km CO2 emissions, you could make a saving on company car tax, VED and congestion charges, too.

Kia says you can go around 30 miles on electric power alone and, true to Kia EV form, that’s pretty much spot on. We managed to complete a 30-mile mixed-roads test route with a bit of electric power to spare and the petrol engine only kicking in when we forced it to. Whether you get anywhere near the claimed 201.8mpg depends on how regularly you manage to plug in; we did it lots and consistently saw mpg figures in or close to three figures.

The transition between electric and petrol power is smooth, but the six-speed dual-clutch gearbox isn’t – it can be a bit jerky, especially when changing down. The brakes are okay, though, with none of the grabby feeling that many other electrified cars have as they rush to recharge the battery while the car is slowing down. 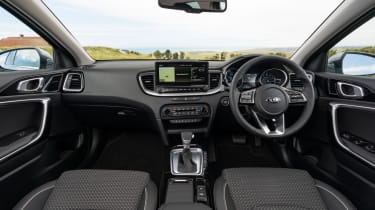 Since this car majors on efficiency, there’s not much fun to be had. 0-60mph takes a leisurely 10.6 seconds, while the chassis aims for comfort more than poise.

The ride is respectably comfortable – a little lumpy over the worst bumps, but nothing that’ll upset you. And although the XCeed will corner flat with little lean, the steering is very much in tune with the car’s acceleration and won’t encourage spirited driving. Refinement is impressive, though – this is a quiet car, especially when it’s running on electric power alone.

It’s very much a family car, too, but in the transition from Ceed to XCeed, a few compromises have been made. In the back, the rising window line means the view out isn’t great – and that could be key for little ones. And if your little ones aren’t so little, they’ll find knee and foot space in the back okay, but not overly generous.

The PHEV’s batteries have to go somewhere, too, which means the standard XCeed’s 426-litre boot shrinks to just 291 litres in the PHEV model.

In the front, things are much better. The driving environment isn’t the most stylish, but as Volkswagen seems to be making its cabins cheaper, Kia’s are getting plusher.

The focus is on quality and ease of use rather than style, and the big 10-inch touchscreen is clear and reacts quickly. It’s one of the best in the class, and is slightly angled towards the driver.

It also displays Apple CarPlay and Android Auto across the whole screen, which many other set-ups don’t, while Kia’s UVO telematics means you can connect your car to your smartphone and monitor charging and other settings remotely.

If you get in quick and really want bigger alloys, a panoramic sunroof, leather seats and a digital driver display (plus a few other bits besides) you can get a First Edition XCeed PHEV for £34,695. For us, though, the 3-trimmed model looks better value.

The alloys are a more forgiving 16 inches in diameter, but you still get privacy glass and smart-key tech, plus cloth and faux-leather seats that are heated, as is the steering wheel. And you get the good looks for which the whole Ceed range has become famous, this time with a bit of extra cladding and a slightly raised ride height.