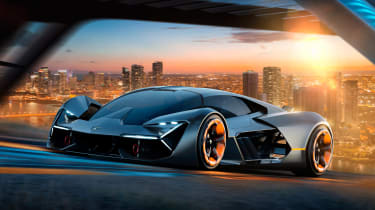 Lamborghini has collaborated with the Massachusetts Institute of Technology to create a breathtaking electric hypercar concept called the Terzo Millennio (Third Millennium), which was revealed at MIT’s EmTech conference this week.

The concept addresses five technological goals set out by the Italian marque in its partnership with the world-renowned American university. Energy storage systems, innovative materials, propulsion system, visionary design and emotion are the five areas of priority Lamborghini targeted for the Terzo Millennio.

• Fastest electric cars in the world

MIT’s Dinca Research Lab and Mechanosynthesis Group both worked alongside Lamborghini to develop energy storage systems and utilise innovative materials. Lamborghini will aim to use electric supercapacitators on the Terzo Millennio, rather than traditional batteries, to give it extra power with less drawback compared to traditional battery-powered EV's.

More advanced carbon fibre structures are utilised in the Terzo Millennio and the body shell itself gathers energy for storage purposes. The project also aims to develop a ‘self-healing’ carbon fibre structure, which contains materials that can heal cracks and other structural damage automatically.

The Terzo Millennio’s energy storage system goes hand-in-hand with Lambo’s third goal – propulsion. The concept takes Lamborghini’s traditional four-wheel-drive system to the next level with each wheel being driven by and integrated electric motor.

As is the case with nearly all Lamborghinis, the design is undeniably dramatic. The concept is even more angular than we’re accustomed to from the brand, with orange glowing wheels possibly owing to the four electric motors tucked within. Thanks to the four supercapacitators and the lack of an internal combustion engine, the designers have had more freedom when crafting the concept, and the result is a hypercar that wouldn't look out of place on the Le Mans starting grid.

Lamborghini and MIT have been in collaboration for exactly one year. The EmTech conference has been held every year by the Massachusetts Institute of Technology since 1999, with this year’s conference taking place on 6-9 November. The conference showcases future trends and technologies to an audience made up primarily of innovators and entrepreneurs.

What do you think Lamborghini's future of super sportscars will be like? Let us know below...