This is the new Lamborghini Sian – the Italian marque’s first hybrid vehicle. Revealed at this year’s Frankfurt Motor Show, it’s a rebodied and re-tuned version of the Aventador, which also happens to be the most powerful car Lamborghini has ever built. Production is limited to just 63 units, to honour the brand’s founding year – and all of them have been sold.

Its powertrain comprises a tweaked version of Lamborghini’s naturally-aspirated 6.5-litre V12 engine and a 48-volt electric motor, which combine to produce 808bhp. Mechanical upgrades for the engine include a set of titanium intake valves, a reconfigured ECU and new exhaust system.

The Sian’s electric motor is sandwiched between the engine and transmission, and produces 34bhp on its own. Unlike more mainstream hybrids, it’s powered by a supercapacitor, which Lamborghini claims is three times more powerful than a conventional lithium-ion battery of the same weight. 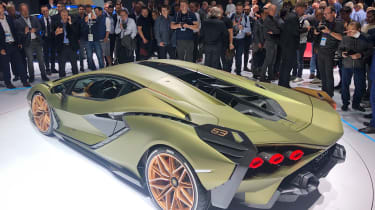 Not only is it the most powerful Lamborghini ever made but also the quickest; the Italian firm claims a 0-62mph time of less than 2.8 seconds. The Sian’s top speed is yet to be officially announced, but Lamborghini says it will be “over 217mph.

Lamborghini claims the Sian’s styling is inspired by the Countach, borrowing design features such as its Y-shaped air inlets, glass engine cover and diagonal bonnet lines. Its Y-shaped headlights pay homage to the all-electric Terzo Millenio concept, while its six hexagonal tail lights have been added. 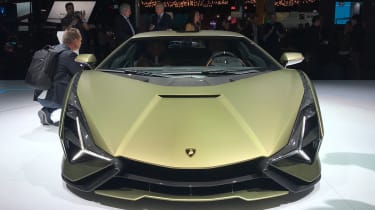 In addtion, the “Sian” nameplate translates as “flash of lightning” in Bolognese dialect, making a rather tongue-in-cheek reference to the car’s electrified powertrain.

The Sian’s chassis features a range of active and passive aerodynamic enhancements. The car’s rear wing only deploys at speed, while its fixed front splitter and side skirt vanes generate additional downforce. Active cooling vanes, made from a heat reactive “smart material,” are also fitted to the car’s engine cover, opening in reaction to the heat generated by the exhaust system.

Each example will be available customised by its owner in collaboration with with Lamborghini Ad Personam, the brand’s in-house personalisation department. A uniquely configured model, finished in “electric gold” is due to make its public debut at this year’s Frankfurt Motor Show.

Maurizio Reggiani interview: can the Sian save the V12?

Maurizio Reggiani, Lamborghini’s Chief technology officer, told Auto Express that it is vital that the firm continues to use V12 engines - something that customers demand. And one way of complying with legislation and retaining a high-capacity, naturally aspirated engine is to adopt a plug-in hybrid technology.

Auto Express caught up with Reggiani to see what the future has in store for Lamborghini.

Is the Sian a demonstration of how you can save the V12?

“In this moment it is a way to prove it is possible to do a hybrid V12 vehicle with natural aspiration with as less weight and much power as possible. We increase power by 33bhp by the electric motor and it only added 34kg. The weight to power ratio increase is one of the best you can have - it is a really good technically solution. It is the most powerful system you can have in a car - three times more power than a normal lithium-ion battery system.

Does it form a basis for the next Aventador?

“This is a technology we look at, but we also scout different technology for Avendator successor such as plug-in hybrid powertrain. And we will decide what is the best choice for Lamborghini - we are close to deciding.”

How do your customers feel about a plug-in hybrid Aventador?

“They don’t want a heavy car and they want a naturally aspirated V12. It must be agile and it must be fun.”

You have the benefit of being with the VW Group, which gives access to lots of platform options. How far away is a fully electric Lamborghini?

“If you talk about super sport car we talk about Aventador. But a full electric vehicle is far, far away for Lamborghini. The technology of today does not allow an Aventador to be fully electric. The constraints are clear: we have to be able to do more than 300kmph and do at least three laps of the Nurburgring continuous - and today that does not yet exist.”

A lot of brands are building continuation models. Is this something Lamborghini has thought about. A modern day Muria?

“If you try to make a tribute to the Muria it can only be worse. I think to try and make another Muria today you can only be the loser.”

What do you make of the new Lamborghini Sian? Let us know in the comments section below…