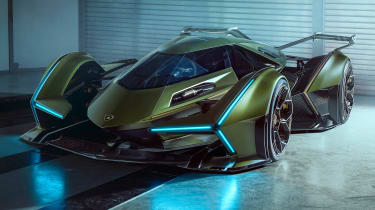 Lamborghini has unveiled a single-seat concept racer, called the Lambo V12, designed for use in the PlayStation 4 racing game, Gran Turismo Sport. It was launched as a full-sized physical model in Monte Carlo ahead of this year’s FIA Certified GT Sport Online Championship World Final. While it’s unlikely to ever reach showrooms, it’ll be available to download through the PS4 racer from Spring 2020.

Penned by Lamborghini Centro Stile – Lamborghini’s in-house design department – it draws influence from the Italian marque’s back catalogue, lifting its silhouette from the 2013 Egoista concept and its hexagon-shaped side windows from the 1968 Marzal concept. Its styling - and most notably the colour - is also inspired by the limited edition Lamborghini Sian which was unveiled at the Frankfurt Show in September.

Even though the “working” finished article is just a collection of pixels on a PlayStation game, Lamborghini says the concept has been designed with aerodynamics in mind. The disconnected body panels and large front splitter supposedly channel air efficiently around the racer’s body, feeding the enormous Y-shaped rear wing and diffuser.

The (virtual) driver enters the cabin of the Lambo V12 Gran Turismo concept at the front of the car, through a hinged glass canopy, like a jet-fighter pilot. The interior is minimalistic, featuring a sole racing seat, a futuristic racing wheel and a holographic head-up display, which projects the car’s speed, gear and engine revolutions onto the windscreen.

Underneath, Lamborghini says the concept racer’s powertrain is a virtual representation of the naturally aspirated 6.5-litre petrol-hybrid V12 found in the Sian. Should it share the same specs, the virtual racer would develop 808bhp, have a 0–62mph time of around 2.8 seconds and a top speed in excess of 217mph.

Mitja Borkert, Head of Lamborghini Centro Stile, said: “The Lambo V12 Vision Gran Turismo is created to provide the ultimate virtual car for young fans and gamers, who are ultra-enthusiastic about Lamborghini and its futuristic aspirations. 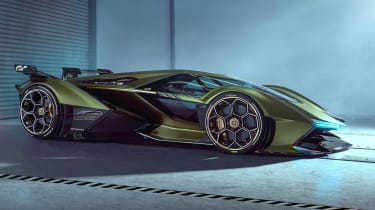 “It is an opportunity for the design talent within Lamborghini to stretch its wings and visualise a car that, like every Lamborghini, is a head-turner and the best driving experience, but also mirrors Lamborghini's push on future technologies – particularly in the arena of lightweight materials and hybridisation.”

The Lambo V12 is the latest in a series of Gran Turismo-based “Vision GT” concepts and the second to be revealed in two months, following on from the debut of the Jaguar Vision Gran Turismo in October.

What do you make of the virtual Lamborghini Lambo V12 Gran Turismo concept? Let us know in the comments section below…

The supercar manufacturer has officially entered the world of esports, with a one-make race series in Assetto Corsa Competizione
Visit New Lego Lamborghini Sian blasts in with 3,696 pieces and £349 price 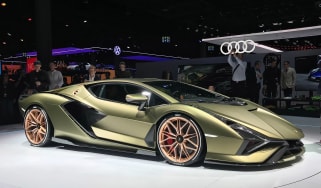