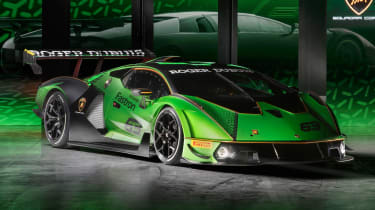 Lamborghini has officially launched its new SCV12 track-only hypercar. The car sports a highly tuned engine, an aggressive aero package and a unique carbon fibre chassis – all of which, the company says, are influenced by the car’s forebears, the Miura Jota and Diablo GTR.

As its name suggests, the Lamborghini SCV12 is powered by a V12 engine. It’s a heavily upgraded version of the naturally aspirated 6.5-litre unit found in the Aventador SVJ, which features an improved exhaust, a better fuel system and a new ECU. Together the upgrades are good for a power output upwards of 820bhp.

To achieve such heady power figures without forced induction, the SCV12 is fitted with a ram-air scoop on its roof, which pushes extra air through the engine’s intake manifold to increase performance. The effect is that the car’s power output increases the faster it’s driven.

Unlike Lamborghini’s tamer road-going hypercars, the SCV12 will send all of its power to the rear wheels via a sequential gearbox. The six-speed transmission is used as a structural member within the hypercar’s platform and supports a pushrod rear suspension system. Lamborghini says this setup reduces the car’s kerb weight and improves weight distribution by limiting the amount of metal in the car’s rear subframe. 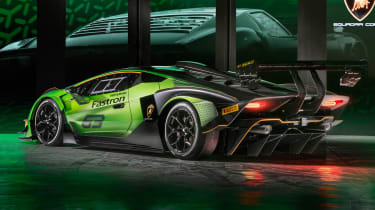 The SCV12’s platform is made entirely from carbon fibre, while its body features a host of aerodynamic appendages, including a braced front splitter, front and rear canards, finned side skirts, a deep rear diffuser and an enormous carbon fibre rear wing. In all, Lamborghini says the SCV12 generates more downforce than a GT3 racer.

Buyers also get a set of enormous Brembo brake discs with six-piston calipers, specially developed slick Pirelli tyres and a unique set of staggered magnesium wheels that measure 19 inches in diameter on the front axle and 20 inches on the rear.

Inside, the SCV12 looks like a thoroughbred racer. There are hardly any creature comforts – buyers get a pair of Alcantara bucket seats, racing harnesses and some Alcantara trim for the dashboard, but that’s about it. However, as this is a track car for playboys, Lamborghini decided not to remove the SCV12’s air conditioning system.

The interior is finished with an F1-style steering wheel and a control panel for the centre console, which lets the driver alter the behaviour of the car’s throttle, clutch and traction control systems. There’s also a switch that disengages the car’s ABS. 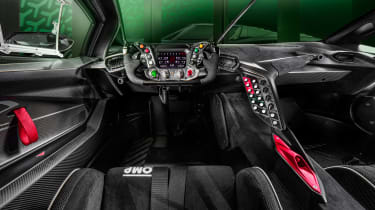 Production of the Lamborghini SCV12 will be limited to just 40 units – and each example will carry a price-tag of between €2 and €3 million (£1.8 and £2.7 million). However, despite the heavy financial outlay, Lamborghini would prefer it if the owners didn’t park the hypercar on their driveways.

Instead, Lamborghini will keep each SCV12 in a dedicated storage facility in its hometown of Sant’Agata Bolognese – and the firm’s engineers will deliver each car to a series of scheduled track events throughout the year to let its owner drive it. Each example will be given its own personalised garage, though, and owners can monitor their car 24 hours a day via webcam, using the firm’s dedicated smartphone app.

Every buyer will also be offered the chance to participate in an advanced driver training programme, under the supervision of the five-time 24 Hours of Le Mans champion, Emanuele Pirro, as well as Lamborghini’s Squadra Corse engineers.

What do you make of the new Lamborghini SCV12? Let us know in the comments section below 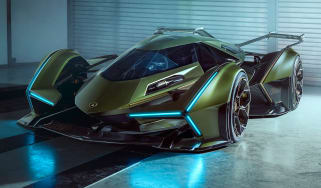