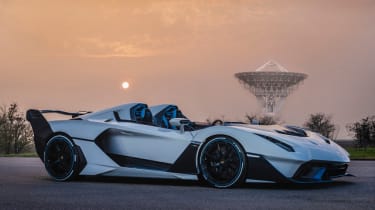 The newcomer is based on the Aventador SVJ and powered by the naturally aspirated 6.5-litre V12 found in the donor car, which has an output of 759bhp and 720Nm of torque. The unit sends drive to all four wheels via a seven-speed automatic gearbox.

Despite the SV20’s mechanical similarities to the Aventador SVJ, it’s bodywork bears little resemblance. It’s an all carbon fibre creation, which draws inspiration from other one-off roofless Lamborghinis, such as the Aventador J and Veneno Roadster.

The car’s front splitter and bumper intakes are also inspired by the Huracan GT3 EVO racer, while its enormous engine intakes were lifted from the track-only Essenza SCV12 hypercar. Unlike both of those cars, though, the SC20 is road legal.

The SC20 rides on staggered centre-locking wheels, wrapped in Pirelli PZero rubber, while the manually adjustable carbon fibre rear wing can be set in three positions that offer either low, medium or high levels of downforce.

The paint scheme is also unique, created specifically for the client’s demands. It comprises a Bianco Fu (that’s white to you and me) base coat, over which a Blu Cepheus highlight has been applied. The buyer has also elected to keep several components, such as the bonnet vent and rear wing, in exposed carbon fibre.

Carbon fibre also dominates the cabin, being used for the dashboard, firewall, door cards, centre console and steering wheel. Even the seats are finished in the same lightweight material, although they’ve been trimmed with Alcantara padding.

There are a couple of bespoke touches, though. The supercar’s interior door handles, for example, were machined from solid aluminium, while the air vents are 3D printed units – and they’re a unique design for the SC20.

What do you make of the new Lamborghini SC20? Let us know in the comments section below…