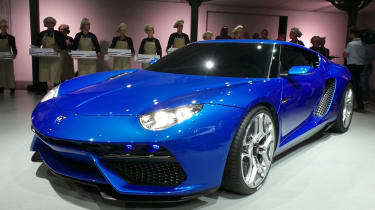 Lamborghini has pulled off the shock of the Paris Motor Show with a new Asterion plug-in hybrid concept that shows a bold new direction for the brand. Officially called the Asterion LPI 910-4, it combines a mid-mounted 602bhp 5.2-litre V10 (borrowed from the Huracan) with a trio of electric motors for a total of 897bhp, 0-62mph in 3.0 seconds and a top speed of 199mph.

While the powertrain is fully functional, the car isn't ready for full production – although we could see a limited run with a price slightly higher than that of the Aventador. The most likely application of the tech will be for the firm's upcoming SUV, due in 2017.

Asterion is another name for the mythical Minotaur (a man-bull hybrid), and the car is Lamborghini’s response to tightening CO2 legislation. Thanks to an electric-only range of 31 miles, it claims 68.6mpg fuel economy and 98g/km emissions. This isn’t just a one-off concept, either; Lamborghini calls it “a model that could be realistically produced today, using technologies currently available”.

To separate it from the Aventador and Huracan, the Asterion’s exterior design is much softer, with more than a hint of the legendary Miura in its curved front end, wraparound windscreen and pronounced haunches. At the rear, the hexagonal screen is made up of three moving glass hexagons, while the brake light is a full-width bar bisecting the Lamborghini badge. 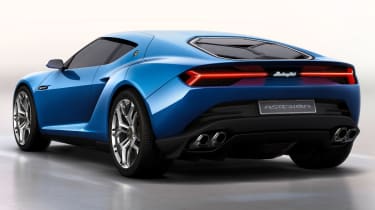 Elektra blue paintwork infused with flecks of glitter, alloys featuring delicate carbon-fibre wishbones and a lit tricolore flag beneath the wing mirrors add flashes of drama, but this overall effect is more understated than either the Huracan or Aventador, and for good reason. Lamborghini’s CEO, Stephan Winkelmann, says the Asterion has been “conceived more for comfortable luxury daily cruising than for ultimate track performance”. That philosophy is reflected in the interior, too, where both seats are mounted higher than in either of the existing models and wrapped in luxurious brown and white leather, rather than racy Alcantara. There’s a luggage compartment in the front, while steeper A-pillars free up additional headroom and improve visibility all round. 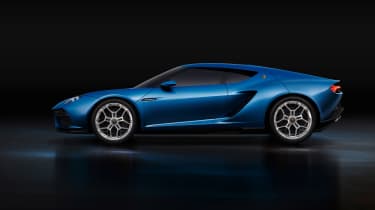 The three-spoke steering wheel is said to be inspired directly by the Miura and includes three buttons for the driving modes – Zero (for full electric), I (for ‘Ibrido’ or hybrid mode that combines the engine and motors for maximum performance) and T (for ‘Termico’ or thermal power that employs the V10 engine on its own). Although it uses the engine from the Huracan, the Asterion is based around the same carbon-fibre monocoque as the Aventador. The seven-speed dual-clutch gearbox is placed underneath the engine, freeing up space along the spine of the car to house the lithium-ion battery pack. One electric motor is sandwiched between the engine and gearbox – and doubles as a starter motor – while the other two spin the front axle. So driven in pure electric model, the Asterion is the first front-wheel-drive Lamborghini.

Get all the latest news from the 2014 Paris Motor Show here. 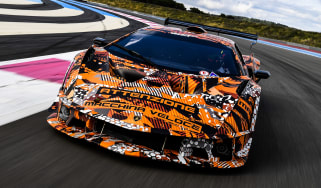