Lamborghini’s latest drop-top supercar has arrived, with the Huracan Evo Spyder putting 632bhp behind the driver 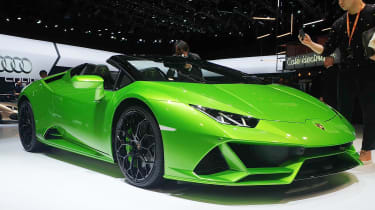 Lamborghini has unsurprisingly followed up the debut of the new Huracan Evo with the reveal of its drop-top companion: the new Lamborghini Huracan Evo Spyder. The convertible supercar has made its full introduction at the Geneva Motor Show.

As with the Coupe, the new Evo badged facelift Huracan Spyder gets an exterior design overhaul with a new bodykit, alongside a handful of serious performance revisions intended to allow the baby Lamborghini to keep its nose ahead of the Audi R8 Performance - itself updated with more power late last year.

Sitting behind the driver and passenger is a naturally aspirated 5.2-litre V10, developing 631bhp and 600Nm of torque – exactly the same as the coupe. But the folding fabric roof mechanism and additional strengthening required to eliminate chassis flex means that the Spyder is markedly heavier than its hard-top sibling, with a dry-weight of 1,542kg playing off against the Coupe’s 1,422kg. 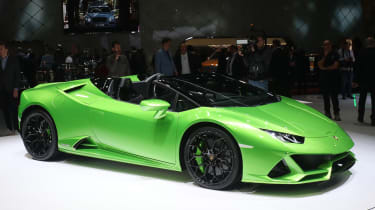 In practice, and with so much power being sent to the all-wheel-drive system from the V10 engine, the Huracan Evo Spyder is only marginally slower than the coupe. Lamborghini claims 0-62mph in 3.1 seconds – just 0.2 seconds slower than the fixed roof version of the supercar, while top speed is clocked at 202mph.

The convertible roof itself opens up via a button positioned on the central tunnel. The roof folds away in 17 seconds and this can be done at speeds up to 31mph, stowing the roof out of view in a compartment consistent with the Huracan’s body lines. When the roof is raised, the rear window can be lowered on its own, removing a key obstacle between the V10 engine and the driver’s eardrums. 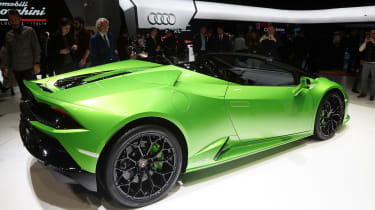 Given the model’s different shape to the coupe, the Huracan Evo Spyder features a unique rear deck. However, the rest of the car uses the new bodykit introduced on the hard top car, with the same new front and rear bumpers and the same aerodynamic tweaks.

To go with the additional power, drivetrain revisions include a new rear-wheel steering system and four-wheel torque vectoring, as well as Lamborghini’s new Dinamica Veicolo Integrata (LDVI) central processing unit. This allows the chassis to be tailored to the driver’s preferences through drive modes and specific chassis and powertrain settings.

In the cabin a new 8.4-inch touchscreen infotainment system appears, but Lamborghini also says that cabin airflow has been altered too, so that the Huracan Evo Spyder is less blustery and quieter in the cockpit than its predecessor.

What do you think of the Lamborghini Huracan Evo Spider? Let us know in the comments below... 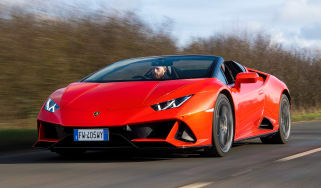 The Lamborghini Huracan Evo Spyder is a magnificent beast but does it have any shortcomings? We drive it in the UK to find out...