How to change a fuel pump 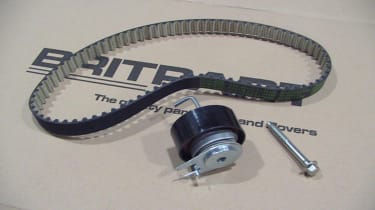 In last month’s issue we covered replacement of the Discovery 3 and Range Rover Sport’s 2.7-litre TDV6 diesel engine’s camshaft drive belt. It’s due for renewal at 105,000 miles or seven years, whichever comes first. The fuel injection pump drive belt is also due for renewal at the same time but, as with the cam belt, many cars have not had this crucial work done.

Compared to the cam belt change, replacement of the fuel pump drive belt should be quick and simple, but poor access makes it a real challenge. The original procedure involved removing the body first, though it’s possible to do the job laying over the engine and reaching down the back of the engine, working with a mirror and by feel. The risk is in dropping something vital, damaging an adjacent part or unknowingly disturbing something that will cause problems later.

After bad experiences, some garages will only do the job with the body off. However, there are plenty of mechanics who are proficient and quick at this job, and the services of a good franchised or independent specialist are therefore worth paying for. To show what’s involved, we’re doing the job with the body off because otherwise we wouldn’t be able to take any pictures in the cramped space.

We’re back in Britpart’s development workshop where Steve Grant demonstrates the belt swap. Incidentally, this drive belt for the 2.7-litre engine is not timed to the pump or engine, so it’s a simple matter of taking the old one off and fitting the new one with its new tensioner. That’s not the case for the later 3.0-litre TDV6, in which the pump needs to be accurately timed to the engine, making it a more involved job.

Fuel is supplied from a low pressure electric lift pump which is mounted in the fuel tank, to a high pressure (HP) fuel pump mounted on the back of the engine. This high pressure fuel pump delivers pressurised fuel to the injectors along the route shown in our diagram.

The HP fuel pump is mechanically driven by a pulley on the end of the left hand exhaust camshaft via a toothed drive belt (remember these are twin-cam cylinder heads, each having a camshaft for the inlet valves and one for the exhaust valves). The drive belt tension is maintained by an automatic sprung tensioner pulley, and it is this tensioner pulley and the belt that needs to be changed. 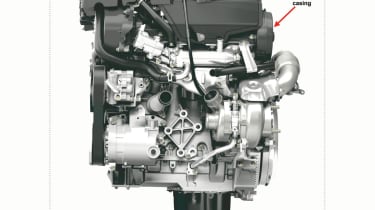 The fuel pump’s drive belt is inside the dark grey casing seen here on the back of the engine (above the silver exhaust cross-over pipe). 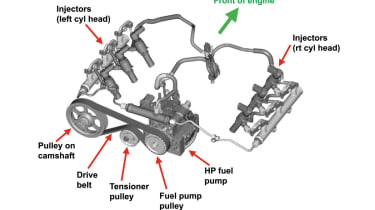 This diagrammatic view shows the pulleys and belt inside the casing, plus the injector feed system which is supplied by the HP fuel pump.

Changing the belt and tensioner

The first job is to disconnect the battery earth lead and then remove the engine’s acoustic cover. The details of gaining access from the engine bay vary slightly between the pre-2007 vehicles and 2007 models onward. Approaches vary when working from under the bonnet and removal of piping, covers and wiring depends on who is doing the job as well as the particular model specification.

Whether the job is being done with the body in place, or removed as in our pictures, the battery will need to be removed for access. Body removal is not as drastic as it may appear. The record time is around 2.5 hours, it’s worth it if other jobs are done at the same time.

Thanks to: Britpart and development mechanic Steve Grant who carried out the belt change and removed the body for general overhaul work.