Behind-the-scenes look at the new Land Rover Defender’s role in the forthcoming James Bond film, No Time to Die 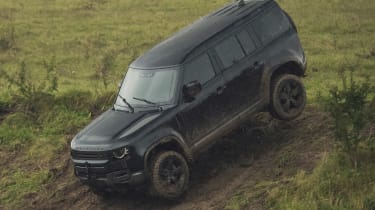 Land Rover has released a series of images which offer a behind-the-scenes look at the new Defender on the set of the upcoming James Bond film, No Time to Die. Due to reach UK cinemas on Tuesday 2nd April 2020, it will be the first film to feature the British brand’s recently relaunched off-roader.

Judging by Land Rover’s latest images and video, the new Defender is being pushed to its limits by the film’s stunt crew. The pictures show a blacked-out stunt vehicle jumping and powersliding through a muddy field, while the short clip briefly shows a heavily damaged Defender rolling over its roof.

With the exception of a roll cage, new bucket seats, racing harnesses and a set of knobbly off-road tyres, the No Time to Die Defenders are mechanically identical to the commercially available models. Styling-wise, they’re based on Land Rover’s Defender X trim, which features 20-inch alloy wheels, darkened skid plates and Santorini Black paint. 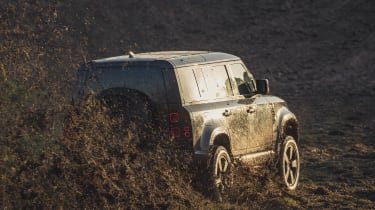 The No Time to Die stunt cars were the first Defenders to be built at Jaguar Land Rover’s new production facility in Nitra, Slovakia. While the new Defender was notably absent from the first trailer, other Land Rover products featured - including a barrel-rolling Range Rover Sport SVR, a classic Series III Land Rover and an original 1970 Range Rover.

Lee Morrison, James Bond stunt coordinator, said: “Designing and coordinating the action sequences for the Bond franchise requires a non-compromising mindset. We needed an unstoppable vehicle to help us battle against the elements, steep descents and river crossings – so we chose the new Defender. I’m beyond impressed that the Defender is not only back but much, much better.”

Following standard convention, the next Bond film will also feature a trio of Aston Martins. The British brand’s CEO, Dr. Andy Palmer, revealed in June that the Aston Martin Valhalla hypercar will appear as Bond's primary mode of transport.

It will be joined by both an Aston Martin DB5 and V8 Vantage, marking the first time the latter car has starred in the James Bond franchise since its appearance in the 1987 film, The Living Daylights.