The new Defender is the best yet. Great over any terrain, the on-road driving experience is more refined and great new interior revisions 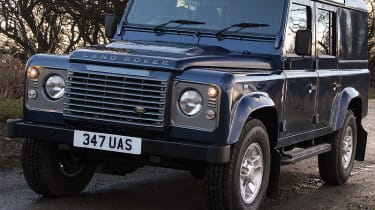 Driving The Defender isn't some tarted-up people carrier - it's a hard-core off-roader that's unstoppable in the rough, whether confronted with thick mud trains, uneven riverbeds or alarmingly steep inclines. As it's narrower than more modern rivals, it's more manoeuvrable. The engine doesn't have to be worked too hard in low range either, while a low first gear helps when it comes to towing. Taken from Ford's Transit, the four-cylinder engine isn't quite up there in terms of power and torque, but it still feels punchy and responsive. Also, despite a long throw, the shift action of the six-speed gearbox is positive. And while the motor is a bit noisy, a long-striding sixth gear gives a more relaxed feel. On the road though, the Land Rover's shortcomings remain, with body roll in bends and unresponsive steering. But revised springs and dampers help it feel more composed than previous models, while brakes have been improved, too. The huge turning circle remains, though!

Marketplace The Defender dates back to 1948 - it is the pioneering go-anywhere, do-anything vehicle. No wonder it has such legendary status. Yet while the styling of this 2007 car is familiar, the refreshed model brought 700 changes with it. That they're so hard to spot from the outside is intentional; it's distinctive, and few competitors have as much charm or presence. Not that it has many, because of its unique status as a motoring icon. You could just as easily put it alongside a Caterham or a MINI as a Nissan Patrol and Toyota Land Cruiser. Mind you, it's great value - making it an interesting alternative to a Land Rover Freelander!

Owning Park the Defender alongside a modern rival, and it's instantly obvious how much taller and narrower it is. This extra ground clearance causes problems when getting in, however - particularly for taller owners, who find themselves having to twist their legs around the pedals. Nevertheless, once behind the wheel, the upright driving position is surprisingly comfortable, if a little cramped; there is still a shortage or right-hand elbowroom. But the new-for-2007 instrument cluster is easier to read and the fresh centre console is a big improvement. New seats are a welcome step up in comfort, as is the revised ventilation system - the dashboard vents no longer open direct to the outside, and the heater warms the cabin 40 per cent faster. Better door seals and noise insulation have cut noise levels, though it's still not a quiet car. But while the rear can feel cramped, it does have a trick up its sleeve; in the 110, there are extra rear seats (and the chairs, borrowed from the previous Discovery, are comfortable). It's costly to service though, and CO2 emissions of 291g/km are not very 'green'. We averaged 19.1 miles to the gallon, though this isn't too bad when you consider the car's permanent four-wheel drive. And list prices do look good value when you consider the Land Rover's decent spec level and seven seats.