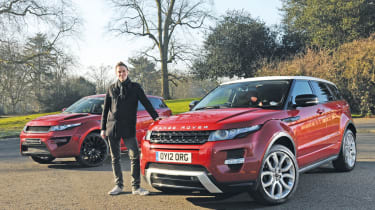 We've likened our Range Rover Evoque to a supermodel before, and it’s fair to say it still cuts an impressive figure. But as more and more appear on the road, its status as the automotive ‘It Girl’ of the moment has waned – it’s just too common. So what next?

Well, a logical next step for any fashionista whose allure has slipped is a makeover, which is why we enlisted the help of London-based design and manufacturing house Prindiville to see what’s possible in terms of styling add-ons and power upgrades.

But does the treatment amount to the sort of stylish reinvention perfected over the years by the likes of Evoque design consultant Victoria Beckham? Or is it a cosmetic lash-up that turns the Evoque into Jodie Marsh on four wheels? We lined up our model alongside a Prindiville special to find out.

Side by side, the bodykitted Evoque manages to make my standard car seem that bit more mundane, although I’d argue both look incredibly distinctive. The aero kit, supplied by Irish tuner Onyx, which works in partnership with Prindiville, adds genuine menace to the familiar squat lines and won’t have the taste police complaining too loudly.

At the front there’s a beefed-up bonnet and new bumper with DRLs and carbon fibre accents, while muscular wheelarches, skirts and door mouldings mark it out at the side. There’s another new bumper at the rear, alongside a diffuser, pillar posts and spoiler all made from carbon fibre. One-piece forged 22-inch wheels add the finishing touch. Under the skin, an ECU remap sees power hiked on the 188bhp engine by 26bhp, while there’s an additional 69Nm of torque. A performance exhaust is fitted and the suspension has been lowered and stiffened, too. And the result? A marked improvement in how well the Evoque responds from low down in the rev range, and surprisingly agile handling.

I feared the worst for the ride on account of those 22-inchers, but around town it’s perfectly acceptable. Only speed bumps were a bit unsettling. Prindiville owner Alex Prindiville tells me this kind of unique treatment is popular in the Middle and Far East, and predictably, with footballers. But back in the real world, what’s the verdict on our Evoque after a year with the car?

Well, driving wise I’ve no complaints. It’s excelled whatever the conditions, exuding a real feelgood factor that makes every journey enjoyable. It rides and handles well, and performance is decent. The cabin impresses, too, with a beautiful finish, easy to use tech and loads of features to pamper you.

In terms of space, though, it’s less than ideal for my family of four. And, yes, I’m fully aware, it’s simply not intended as an option for families. But that message isn’t getting through, judging by the number of jealous dads at my daughter’s nursery who’ve told me they’d consider buying one. The compact dimensions, allied with the high £41,000 price and poor fuel economy, mean I struggle to recommend it to them. Turn back the clock four years, though, before there were any junior Hopes on the scene, and I’d have been sorely tempted. I might even have splashed out on some of that Prindiville muscle, too...

“If there’s one car that doesn’t need any cosmetic tweaks, then it’s the sleek Evoque. I guess beauty is in the eye of the beholder, though.”James Disdale, Road test editor

“The Evoque is expensive in the same way the MINI is expensive and Citroen’s DS range. They are all for the fashion conscious and priced as such.”Jon Mower, via www.autoexpress.co.uk