Lexus could build two new coupes, as part of its design-focussed future 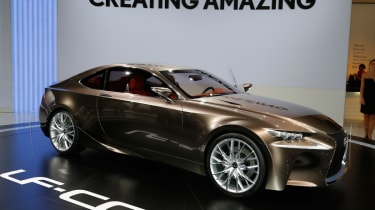 The Lexus LF-CC will become a production reality, with the BMW 4 Series-rivalling coupe set to hit the road in 2015.

Talking to journalists at the Los Angeles Motor Show, a senior Lexus engineer confirmed that the show marked the end of his project to develop the all-new IS saloon, which will make its debut at the Detroit Motor Show in January 2013.

He added that he will begin work on the IS Coupe in 2013. The car is expected to draw its style from the LF-CC. However, it’s likely that the IS Coupe will use a traditional petrol drivetrain, rather than the hybrid setup of the concept. This will be offered in the IS saloon in place of a diesel engine.

But while the CC is “extremely likely” to be built, according to a source, the larger LF-LC could also make production, thanks to the overwhelmingly positive reaction it received when it debuted at the Detroit Motor Show earlier this year.

Unlike the LF-CC, which was designed at Lexus’s HQ in Japan, the LF-LC was designed at its Calty facility in California, which has a record of designing concepts which are fast-tracked into reality based on public approval.

Talking to Auto Express at a tour of the Calty facility after the LA Show, Calty boss Kevin Hunter talked about the FJ Concept designed there, that was shown at the 2003 Chicago Motor Show.

Despite only being planned as a concept car, thanks to massive public approval, the FJ Cruiser made production in three years, as its radical design could be applied to existing Land Cruiser hardware.

With the design and hardware already in existence, a larger version is surely possible, given how positive the public reaction has been.

Not only did the LF-LC concept win the best concept award at Detroit, a second version of the concept - painted Opal Blue instead of the red of the first concept - was built to ensure that demand for the car’s presence at other motor shows could be met.

Hunter also confirmed to us that Lexus’ HQ in Japan has already received letters from US dealers asking for a production version of the 500bhp luxury GS coupe to be built.