Lexus took the wraps off a new flagship saloon at the recent Detroit Motor Show in the form of the all-new LS, but Toyota’s luxury arm isn’t quite satisfied with just a new premium vehicle for the road – Lexus is going after the seas.

Called the Lexus Sport Yacht Concept, it’s a design study created to explore what the Lexus brand and its design values might look like when applied to things other than new cars. 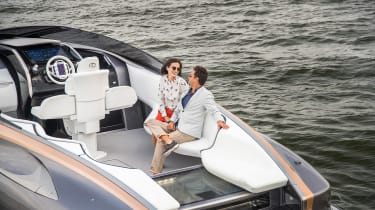 • We get our sea legs in the Aston Martin AM37

Coming in at 12.7 metres long and 3.86 metres wide, the upper deck is seamlessly bonded to the hull. Both sit on top of an inner structure, and are made from large single sheets of carbon fibre reinforced plastic (CFRP). Lexus says using this material saves around a tonne compared to conventional fibreglass reinforced plastic.

The cabin is finished in leather with wood and glass trims, and features sofa seating for six plus a table. In the gallery there’s a stove, sink and fridge, while the head boasts a shower. A 4G Wi-Fi enabled audio and video entertainment system is networked around the yacht.

For the captain, there’s a touchscreen panel for all of the on-board controls and systems, plus a power adjustable seat with fold out armrests that double as jump seats on either side. 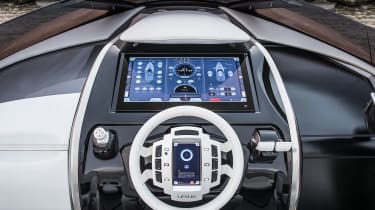 The idea to create a Lexus yacht came straight from the top – Toyota president Akio Toyoda tasked teams at Lexus Design Centre to come up with the concept after experiencing some of the latest craft created by Toyota’s marine division.

While it’s a similar proposition to Aston Martin’s £1m-plus AM37 speedboat, the Lexus Sports Yacht will remain a one off concept, with no production examples.

Would you rather take to the seas in the Lexus Sports Yacht Concept or the Aston Martin AM37? Tell us your favourite in the comments.