Lexus GS F takes a refreshingly old-school approach with its 5.0-litre V8 but can it out muscle the BMW M5 and Audi RS6? 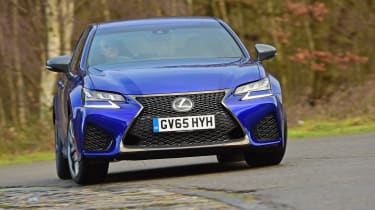 There’s plenty to like about the GS F, not least the non-turbo V8 engine and the balanced rear-wheel-drive handling. It’s also beautifully built, really well equipped and reasonably comfortable. It lacks the precision and involvement of its rivals, and that big engine doesn’t have the bite to match its bark. However, it’s a convincing leftfield alternative to the usual suspects.

The new Lexus LC 500 might be stealing all the fame at the moment, but the Lexus GS F saloon has the BMW M5 and Mercedes-AMG E 63 firmly in its sights.

Equipped with a 5.0-litre V8 engine, rear-wheel drive, heavily uprated suspension and subtly enhanced looks, it has all of the raw ingredients needed to succeed. A huge amount of the car's appeal comes from that sweet V8, which delivers 471bhp and 530Nm of torque, although the latter doesn't arrive until 4,800 rpm. Because of this, the Lexus never really feels as fast as its claimed 4.6-second 0-62mph time.

It isn’t slow, but below around 4,000rpm it lacks the punch of turbocharged rivals. However, once the revs climb the GS F accelerates with far more urgency. Better still, it’s backed by a V8 growl from the distinctive quad exhausts. Yet the engine’s potency is blunted by the eight-speed automatic gearbox, which lacks the crisp response of dual-clutch units, even in its raciest Sports+ mode.

With lowered and stiffened suspension, wide Michelin Pilot Super Sport tyres and a clever rear differential, the Lexus feels far more poised and grippy than the standard car; it’s just never as engaging as its rivals. There’s plenty of front end bite when you turn-in, but the progressive steering lacks any real feedback. Body roll is more of an issue than you’d expect, while the uprated Brembo brakes soon feel as if they’re struggling to slow the hefty 1,850kg Lexus. 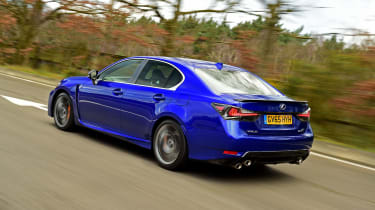 Still, the trick differential enhances agility by shuffling power to individual rear wheels, while drivers can tailor the car’s responses by choosing from Track, Slalom and Expert modes – the last of these lets the car slide a little before intervening.

Yet the Lexus is at its best when you treat it as an extremely rapid executive express. The supple suspension does a fine job of soaking up bumps, while the gearbox effortlessly slurs ratios in full auto mode. The GS F is also impeccably refined, while the extremely well equipped cabin is flawlessly constructed from high-grade materials. Although the gaping grille, orange brake calipers and subtly flared wheelarches hint at the car’s potential, the overall design is classily understated.