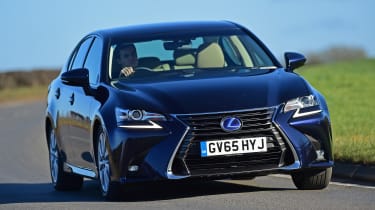 Low emissions, build quality and a relaxed driving experience have long been major plus points for the Lexus GS - and it now looks good too. Fuel economy is very similar to 2.0-litre diesel rivals thanks to the hybrid powertrain, but those cars tend to be better to drive and more practical. Having said that, if you’re after a comfortable company car for commuting, the Lexus is definitely worth a look.

The hybrid Lexus GS has always been an alternative choice in the executive saloon market, with diesel models like the BMW 5 Series and Jaguar XF taking most of the attention. With attitudes to diesel changing, however, Lexus will be hoping that this facelifted model will start to stand out.

The nose has been updated to match the rest of the brand's current range, with the spindle grille extended further forward, larger vents on the front bumper and sleeker headlights all contributing to a much sportier look. The rest of the car is very similar to the previous model, with a few details on the sills, boot lid and lower rear bumper being changed to give the GS a more dynamic look.

The redesign has worked well, and while the GS isn't as handsome as the latest Jaguar XF it's certainly a stylish car. That appeal will only increase when potential owners, who are highly likely to be company car buyers, see the 64.2mpg economy and 104g/km CO2 emissions figures for this 300h model. 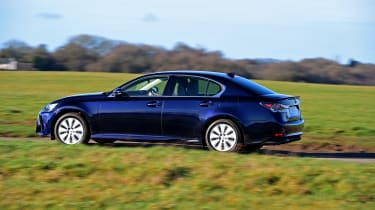 While that's only 5g/km better than the diesel Audi A6 Ultra's 109g/km, the fact that this is a hybrid means that the GS is in the 15 per cent tax bracket, compared to the Audi's 19 per cent (until April 2016). That's a huge saving over a number of years, and that saving alone will be enough to convince many buyers to go for the Lexus.

The GS is well equipped too, with heated leather seats, a 12.3-inch display for the sat-nav, LED headlights, parking sensors, adaptive cruise control, traffic sign recognition and automatic high-beams all standard on the entry-level model. 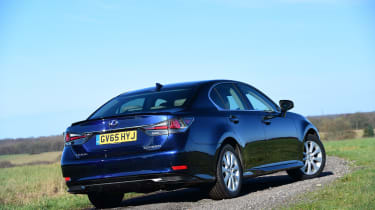 All of that tech is fitted into a smart cabin, which feels very well built and upmarket. There are soft-touch materials everywhere, and the attention to detail is excellent. One small touch that makes a surprisingly big difference is the raised buttons on the steering wheel (like on the '5' button on a keypad) so you don't have to take your eyes off the road. The GS is let down by its fiddly infotainment control system, though - the unusual and imprecise 'mouse' makes entering a postcode very frustrating.

The plush seats are comfortable and calming to sit in and progress feels effortless at any speed. In particular, the electric motor makes navigating low-speed traffic relatively stress-free and the well-insulated cabin also stays very quiet on the motorway where the standard-fit active cruise control really adds to the GS’s ability as a comfortable cruiser.

Unfortunately rivals like the Jaguar XF and BMW 5 Series manage to be great on the motorway while still being fun to drive on a twisty road, and the Lexus just can't match them. The steering is a little vague and the car feels heavy and cumbersome on smaller roads thanks to the bulky hybrid powertrain. 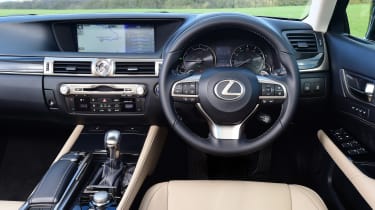 Although the CVT gearbox isn't noticeable most of the time, it still makes it hard to enjoy driving the Lexus GS as much as you do its rivals. When you put your foot down it takes too long to bring the engine revs up for more power, and when it finally gets there you're treated to a droning engine note. Despite having more power than the Audi A6 Ultra, the Lexus' extra weight means it's nearly a second slower from 0-62mph, taking 9 seconds.

It's not as practical as the Audi either: hybrid batteries mean the boot is only 450 litres, compared to the A6's 530-litre offering. There's more rear legroom and headroom in the Audi as well, and tall passengers in the back of the GS will struggle to get comfortable.

Lexus dealers have been voted top of our Driver Power survey for 14 years on the trot, so you're sure to have a smooth buying experience. The previous GS came in 6th overall for reliability too - and this new one should be just as dependable.