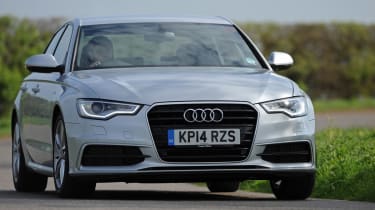 The Audi A6 took our Best Executive Car of the Year award two years in a row, but besides the facelifted model’s smart new lights and wheel designs, Audi has also squeezed yet more efficiency out of the 2.0-litre TDI engine. Best of all, the S-tronic automatic is now substantially more economical according to the official figures, which is great news for fleet buyers who can spec this car guilt-free with the gearbox that suits its character best.

The competition in the executive saloon class is tough, so Audi revised its A6 Ultra to fend off the challenge it faces from the UK, Germany and Japan. The army of high-mpg, tax-friendly rivals it must beat includes the Lexus GS300h hybrid as well as diesel versions of the BMW 5 Series, Mercedes E-Class and Jaguar XF.

The A6 Ultra range includes saloon and Avant estate variants with an advanced 2.0-litre TDI diesel engine and a choice of dual-clutch S tronic automatic or manual gearboxes. The standard A6 trim levels are offered too and that means a further choice of SE, S line or Black Edition specifications.

On the combined cycle, Audi claims the S-tronic saloon will achieve 67.3mpg and 109g/km, while the manual scores a marginally worse 65.7mpg. The Avant is not quite as green as the lighter saloon, but with best figures of 64.2mpg and 114g/km (62.8 and 118g/km for the manual) it's still a remarkably green big saloon.

Otherwise, the Audi A6 Ultra is largely unchanged from the standard A6 with a quality feel permeating the interior and a classily understated exterior look. However, the A6 has been around for a while now, and compared to more modern, high-tech feeling rivals like the latest Mercedes E-Class, the Audi is starting to look a little old school inside. 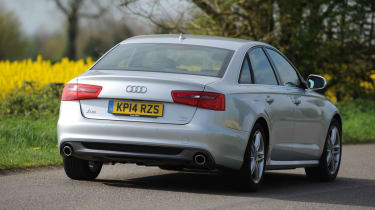 It's not quite as sharp on the road as the rear-wheel-drive BMW 5 Series or the Jaguar XF either, but Audi has managed to achieve its efficiency gains without significant drawbacks in terms of performance or driving experience.

Low emissions and frugal economy are one thing, but these days buyers demand cost benefits without having their driving experience compromised. Fortunately, the Ultra delivers here – it’s like a low-fat dinner that has so much flavour you’d never guess it’s actually good for you.

The improvements have been achieved without resorting to methods such as ride-ruining eco-optimised suspension settings. Engine and exhaust upgrades mean the Ultra not only has more power than the existing 2.0-litre TDI – 187bhp compared to 175bhp – but torque is up from 380Nm to 400Nm, too. Most impressive of all, emissions are down by 14 per cent.

Peak torque arrives from just 1,750rpm, ensuring that the Audi feels punchy and responsive whenever you press the throttle. Leave the transmission in auto and it shifts smoothly through the gears, while the steering wheel-mounted paddles give you the manual control to enjoy the torque and feel a bit more engaged with the engine.

There’s a slight diesel clatter at idle, but you’ll only notice it outside, as inside the TDI is hushed and very refined. If you pin the throttle at motorway speeds then the refinement can deteriorate as the gearbox kicks down and engine revs rise, but it's no worse than in its rivals from BMW and Jaguar – although the new E-Class is more refined on the move.

The steering could do with a little more feel and the A6 lacks the extra handling sparkle of rear-wheel-drive rivals such as the 5 Series and XF, but it’s a well sorted front-wheel-drive saloon that has a sharper turn-in and more grip than the Lexus GS. 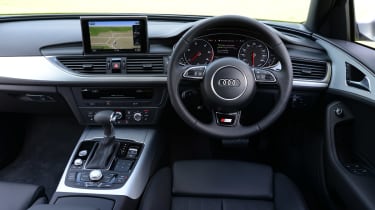 The S line suspension gives a firmer edge to the ride – so we’d add the standard set-up, which is a no-cost option and better suits the A6’s refinement. It’s this that defines the car, too – it’s comfortable and good to drive, so you’d be hard pushed to tell the Ultra was an eco-optimised model.

While the A6 Ultra can’t match the new Mercedes E220d SE’s 102g/km CO2 output, it’s still an efficient executive saloon, making it a strong company car choice. But it will cost a higher band taxpayer £224 a year more than the Lexus GS 300h.

However, both business users purchasing the car on a monthly lease and private buyers will appreciate the A6’s predicted 47.5 per cent retained value – it loses £4,867 less than the Lexus after three years.

Fixed price servicing helps with maintenance and Audi offers optional warranty extensions. As well as being cheaper to insure than the Lexus, it’s also more efficient, returning 64.2mpg and emitting 114g/km of CO2.

But with newer rivals like the Mercedes E-Class moving the efficiency game on another step with vital figures of 72.4mpg and 102g/km CO2, while the A6 might still be efficient, it’s starting to show its age under the bonnet.

With an elegant and appealing design, the A6 is an unassuming but classy saloon. Taut lines and smart design touches are matched to Audi’s trademark grille, which is larger in the facelifted car. Techy LED headlights with scrolling indicators are also now available as an option, but xenons with LED running lights are standard. 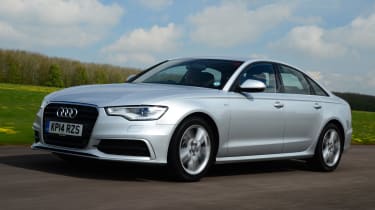 And while the Audi’s interior borrows much of its style and quality from the brand’s flagship A8, compared to the Merc E-Class the layout and integration of the technology doesn’t feel quite as modern.

The upmarket instruments blend with Audi’s intuitive MMI control system to create a cohesive driving environment that’s complemented by top-drawer switchgear and a perfect driving position. The MMI's processor trip has been upgraded in an Apple-style update for the facelifted car, but while it’s snappier to rattle through the menus, rivals are at least as good if not better.

Racy touches, like the perforated leather multifunction wheel and S line sill trims give the eco-optimised Ultra a sporty edge, too.

A big transmission tunnel means you’ll need to stick to the outer seats, but with plenty of head, leg and shoulder room, even tall adults will be comfortable in the back of the A6. The 530-litre boot is excellent, albeit 10 litres down on the largest in the class, while you can fold the rear seats, improving the load area with 995 litres of room. However, rivals still boast more space with the back seats folded.

Front and rear parking sensors are standard, plus the Ultra also comes with a space saver spare wheel, towbar preparation and Isofix for the front seat and outer rear chairs. Up front, a big glovebox, decent sized door bins and a central cubby ensure there’s a good amount of cabin storage as well, but while the interior feels more spacious than the Jaguar XF’s cabin, it’s not quite on a par with the roomy E-Class. 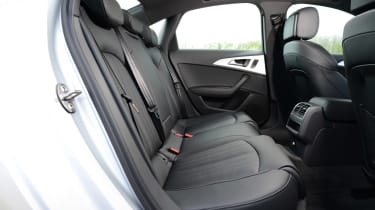 The A6 was 81st in our Driver Power 2016 satisfaction survey, and finished lower down the running order when it came to reliability. However, a sixth place finish for build quality proves the brand knows how to make premium products.

In terms of safety, the A6 has a five-star Euro NCAP crash test rating, with an impressive 91 per cent for adult occupant protection. Standard safety kit includes six airbags, but you can also specify optional extras such as adaptive cruise control, lane departure warning and a blind spot monitoring system. 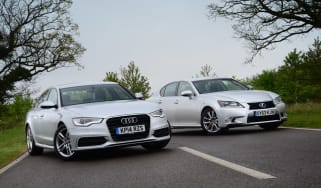 Can clean-living Audi A6 Ultra topple industry heavyweight Lexus 300h in the battle for business drivers?
Skip to HeaderSkip to Content