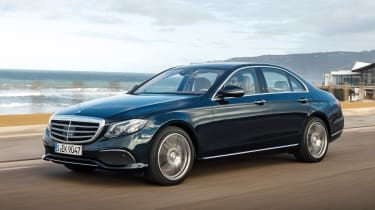 Extra in-car tech and a more efficient, more refined engine put the E-Class back in business. The derivative styling might put some buyers off, and it’s more expensive than the competition, but you do get a lot of equipment for your cash. The Mercedes still isn’t as good to drive as rivals from BMW and Jaguar, but as a package, the E-Class is more appealing than ever.

Like the smaller C-Class, the new Mercedes E-Class takes the best bits of the brand’s flagship S-Class saloon to create a sleek, high-quality and efficient alternative to cars like the BMW 5 Series and Audi A6.

With its big grille, long bonnet and tapered rear end, the E-Class now has a strong resemblance to the rest of the Mercedes family. The new styling is underpinned by some practical changes. The car’s wheelbase is now 65mm longer than before, so it’s roomier inside, while under the bonnet there’s an all-new four-cylinder diesel engine.

Mercedes’ new 2.0-litre turbodiesel replaces the clattery old 2.1, and it’s a huge improvement. It’s quieter from a cold start and if you plant your foot, you’ll notice the intrusive grumble has almost vanished. 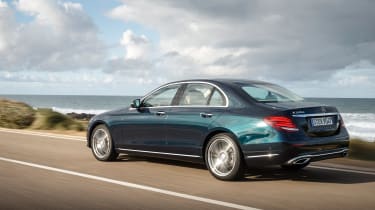 The new diesel is paired with Mercedes’ nine-speed automatic gearbox. It suits the character of the car well, managing shifts smoothly when cruising around. However, in the Sport and Sport+ driving modes, the changes aren’t quite as slick as with BMW’s eight-speed unit. Still, it works well most of the time and keeps the car refined. At motorway speeds, the E-Class is very quiet. 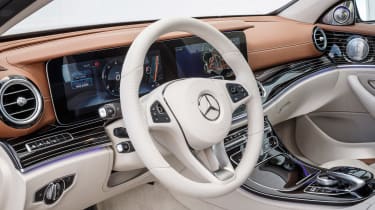 Two trim levels will be available from launch, with SE cars starting at £35,935. The sportier AMG Line costs £2,495 more. Both come well equipped, with parking sensors, a reversing camera and a self-parking system, as well as sat-nav and LED headlamps.

Our test car was also fitted with the brand’s air-suspension; when combined with a 100kg weight saving, this provides a lovely, fluid ride. In Comfort mode, the car floats over bumps and the body control has a softer edge. SE models get 17-inch wheels as standard, but on optional 18s the chassis still deals with poor road surfaces sweetly – insulating passengers from bad bumps.

Flick into the Sport or Sport+ settings, and the chassis ties the car down more aggressively through quick changes of direction. But drive a little faster and you rapidly approach the limit of its agility. There’s enough grip, but very little feel through the steering wheel, so it’s best to leave the E-Class in Comfort mode. We’ll have to reserve judgement on how the car rides and drives on conventional steel suspension (lowered, comfort suspension will be standard) until we drive it in the UK.

It’s fair to say the E-Class excels when it comes to practicality. The longer body makes for a 540-litre boot, while there’s plenty of rear head and legroom. But it’s in the front where big changes have taken place.

Using styling cues from the S-Class, the flowing dash features four central air vents, with high-quality leather and trim inlays adding to the upmarket feel. Our test car was also fitted with the new twin 12.3-inch widescreen display option, which stretches out across the dash.

• Which is the best premium car brand? Vote here!

The screen in front of the driver shows key data like speed and revs, and is customisable depending on driving mode. It also shows a small sat-nav map, while the full screen to the right deals with the infotainment system. The graphics look great and the new displays are actually more advanced than those on the S-Class. 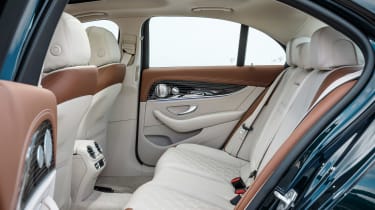 It’s an impressive alternative to Audi’s Virtual Cockpit and makes the A6 and 5 Series feel old fashioned. This is just the beginning of the advanced tech the new E-Class is packing, too. The LED headlamps are now even more intelligent and respond quicker to oncoming cars, while the Digital Vehicle Key allows you to unlock the car using your smartphone.

It’s not the only smartphone tech Mercedes has developed for this new model, either. A new system called Remote Parking Pilot lets you control the car using a bespoke app, so you can tuck the E-Class away in a tight parking bay or garage without risking dinging the doors when you get out. But be prepared to pay extra for these.

There’s also plenty of safety tech. Mercedes is a pioneer when it comes to releasing new protection features, and the E-Class is the first to get Drive Pilot. The brand calls this option “the next step on the road to autonomous driving”. It uses the car’s radar-guided cruise control and automated steering to keep you in your lane at up to 130mph, but it can even follow another car if there aren’t any white lines on the road. 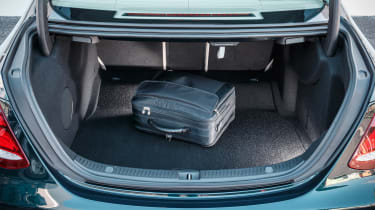 Flick the indicator on and the Active Lane-Change Assist uses data from cameras and radar sensors to change lanes for you. However, due to legislation on UK roads, this feature isn’t expected to be available here.

The E-Class remains effortless to drive. Long-distance journeys are comfortable, and while it’s not the most engaging car on a twisty road, there’s just enough control in the chassis to ensure it feels secure. We’ll see new executive saloons from Audi and BMW in 2017, but until then both brands should be worried by the E-Class when it comes to quality, comfort, tech and efficiency, which are what really count in this class.