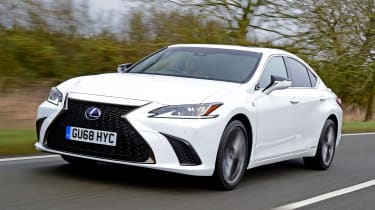 Lexus has long followed the hybrid route, and in the UK at least the ES will only be available with a petrol-electric drive system. Depending on the model and the alloy wheels fitted, the ES is capable of between 48.7 mpg and 53.2mpg under WLTP testing protocols, giving it a theoretical range of almost 600 miles on a single tank of fuel. Emissions are rated at 100g/km NEDC for the entry-level ES version, rising to 106g/km for the F Sport model. That makes it an appealing prospect, as it manages to compete with diesel rivals, but using petrol power. For company car drivers it also means a lower Benefit in Kind band than for similarly priced diesel executives, because the ES isn’t subject to the 3% BiK surcharge on diesel models.

Road tax rates for the ES are competitive, although the price tag can affect this significantly. The entry-level ES model costs £130 per year at the current rates which is £10 less than a non-hybrid alternative, which is a modest saving. However the Takumi version has a list price over £40,000, which means it attracts the £310 surcharge for the first five years of ownership, while other models could quite easily be pushed over the £40,000 barrier with a few options added.

Lexus doesn’t quote an official range for the ES when operating on electric power alone, because the system is set up to use the best combination of electric and petrol power for the driving conditions. Drive around town, and the ES has the potential to travel on battery power most of the time, with the petrol engine only engaging when faster acceleration is needed. Like other Lexus hybrids you can change the vehicle mode to save the battery for later in your journey and keep it fully charged. As the ES is what Lexus terms a ‘self-charging’ hybrid, power is returned to the battery by a combination of regeneration and engine power, so there is no need to plug it in. 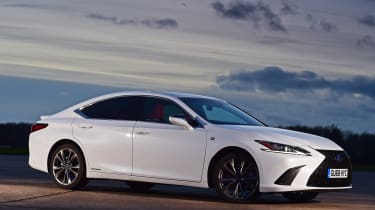 Insurance groups for the Lexus ES vary from group 33 for the standard model to 34 for the F Sport trim and 38 for the Takumi trim, which is broadly in line with rivals. Because there is no high performance version of the ES however, the highest group 38 model is lower than equivalents from Audi and BMW.

The previous Lexus GS model retained between 37% and 44% of its value after three years, but the ES is slightly better, with a retained value of 41-46%. In comparison, the BMW 5 Series, Mercedes E-Class and Audi A6 are a couple of percentage points ahead of the ES – demonstrating that the German marques are still the popular ones in the sector.